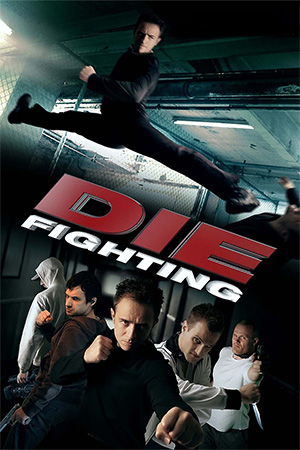 Fabien Garcia and his Z Team cohorts make their full-length feature debut with the fight packed fun that is ‘Die Fighting’. Jamming in more fights than you can shake half a dozen kung fu films at, ‘Die Fighting’ sees the team (Fabien, The Buson’s and Jess Allen) essentially playing heightened versions of themselves as struggling stuntman/screen fighters trying to make it in Hollywood. Well, fame comes a calling in the form of the mysterious Filmmaker, who kidnaps Fabien’s wife and forces Fabien and his crew to run around the city fulfilling his dangerous demands. Tracking them with various cameras and devices, The Filmmaker pushes Fabien and his team to their limits in an onslaught of brawls as he vies to create the ultimate reality action movie and thus finally make the Z Team famous.

While found footage/CCTV/reality themed films (including action ones) are a dime a dozen these days, ‘Die Fighting’ takes a fresh approach to the genre seemingly making a film as it happens with people desperate to make it in the movie business. The use of various cameras and devices is cleverly used and mercifully never resorts to lots of shakey cam or running around where we the viewer can’t decipher what’s going on. It’s all perhaps a little too polished for a film being shot as it happens but it all looks good and it’s nice to be able to tell what is going on: especially when it comes to the action.

And action is what ‘Die Fighting’ is really all about. The straightforward set-up is really just a framework to hang a shed ton of awesome fight scenes around (seriously the four guys hardly bat an eye when they are forced to attach tracking devices to themselves and commit crimes!) but when the fights are this good (and creative) there is really not much to complain about (though those who love their precious plots no doubt will!). As a feature length platform for the Z Team to showcase what they can do, ‘Die Fighting’ excels in its almost continuous barrage of martial arts action. The boys know what they are doing when it comes to screen fighting and all get the chance to really shine in a series of creatively choreographed kung fu confrontations that build in intensity. Plus thanks to Garcia and his team’s crisp choreography and camerawork we get to see every wicked block, spin-kick, and takedown. From a creative fight against a swarming SWAT Team, to some neat drunken boxing, to several high-impact one-on-one confrontations, the Z Team have gone all out and really impressed with their commitment to kung fu awesomeness.

Alas, while the concept and kung fu are great unfortunately the acting lets proceedings down a little. Not that all the principals don’t try, they certainly do (with Jess Allen coming off as the most likeable) but with far too much reliance on F-bombs and everyone repeatedly shouting “I’m going to kill you” down a phone, the dramatics don’t always keep up with the excellence of the fight action. However, this far from ruins proceedings. As things progress one does get caught up in the character’s predicament leading to a less than expected ending: one that will no doubt split viewers depending on how clever one thinks it is. Yet, for the most part ‘Die Fighting’ is an excellent (meta) martial arts flick showcasing the Z Team to be major players on the action movie block meaning breath is abated for their next feature film.