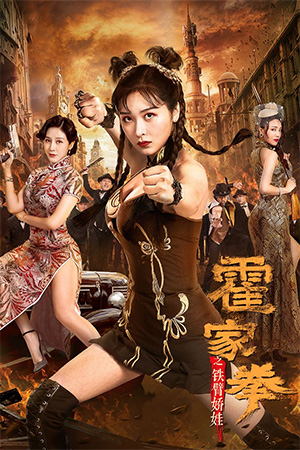 Along with a number of other young women, Axi is sold to a local Shanghai mobster to work in his club. On arriving outside the establishment, Axi shows herself to be a very capable fighter, dispatching of one of the ruthless gang leaders after he let her friend die. Rather than kill her, the city godfather decides to employ her in the club and, as the years pass, she becomes a feared bodyguard in the underworld and helps her employer fight off the foreign encroachment that other businesses are falling foul of. Yet a chance of love and a reminder of her roots puts her in a potentially life-threatening position and she must fight off assorted hordes to save the day.

There have been a fair few made-for-video or television movies from China that have escaped into the wider world. While the budget is often lacking (copious use of computer effects is usually a tell-tale sign of this), that doesn’t mean they need not be entertaining; when one recalls how much a good, solid 70s independent kung fu film cost compared to them, it’s easy to see how modest production values can be overcome. Unfortunately, while this is often used to inspire film-makers to fall back on their imagination and focus on fight choreography – something that even a micro-budget can work with – now it is more of a lazy excuse to throw clichés on the screen. Make no mistake, clichés have always been a part of the genre, but seeing them executed so predictably is hard to forgive.

The merciful part of ‘The Queen of Kung Fu’ is that it is short – just over seventy minutes long. Yet the writers try to cram as much drama as possible into the running time, even having the heroine master a new technique right near the end. Remarkably, despite all of this, the film still drags in places and offers very little incentive to finish it. Yes, there a few passable fights here and there, but they are filmed in that quick-cut style that every director now utilises, obscuring any quality that the performers might have. To just have a shot last more than a second would be nice; it always feels as if the makers are trying to distract from some glaring deficiency on the part of the cast when they do this. The characters are needlessly histrionic, the story patchy and the finished article woefully inadequate.