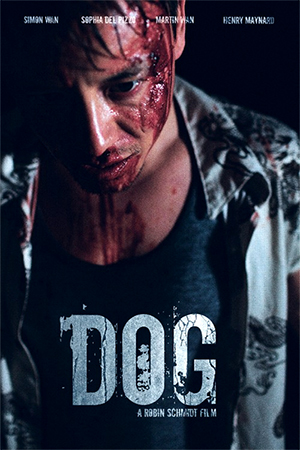 This down and dirty short film is a brutal little piece looking at the effects of violence on those shunned by society, isn’t for those of a weak disposition but is a rewarding and challenging film. Dog (Simon Wan) is the enforcer of a local triad gang whose sole purpose is to dish out violence when his boss calls for it. Ordered to clear out a warehouse full of druggies, Dog does so with typical violent force. However, when he fails to kill all of the intruders, as he was commanded to do so, Dog is ordered to stay in the warehouse as punishment until further notice. Obedient to the core, Dog holes up in the shabby building surviving on a box full of noodles and an old Gameboy (retro cool!) left behind by the former inhabitants. Permanently wound tight like a coiled spring, Dog has no means of letting out his violent rages and spend his days ranting, raging and flying his fists in effort to let out the pent up fury. A release, and possible salvation, arrives in the form of a lonely junkie women (Del Pizzo) looking for a quiet place to shoot up. After some initial hostility and a bit of negotiation, Dog allows her to stay in the warehouse with him and the two form an unlikely bond. However, can the two of them let go of their violent lives to forge a new life together and is Dog capable of escaping the sadistic grip of his master.

‘Dog’ is a powerful short film that doesn’t flinch on the violence and certainly delves into the dark corners of society (violent humiliation, drug addiction, prostitution) but thanks to some skilful filmmaking (the film is very well shot) and some very committed performances by the cast, ‘Dog’ finds some humanity and hope within its lost soul characters: even if it’s only fleeting. Wan and Del Pizzo are extremely good as the two leads and even though their relationship is formed on a need of violent release (be warmed there are some uncomfortable scenes highlighting this) we the viewer do come to warm to the pair and hope they do find a way out of their predicament. Even though ‘Dog’ is drama heavy the makers also inject proceedings with a couple of lively fight scenes, crisply choreographed by Chris Jones (‘Bodyguard: A New Beginning’, ‘Blood: The Last Vampire’).

Whilst ‘Dog’ is a walk on the wild side it is never too unrelenting, mainly thanks to the warm chemistry that develops between the leads, but on the downside the makers perhaps rely a little too much on editing tricks, especially the use of slow motion: it’s just used far too often when it isn’t needed. The actors are more than capable of expressing the drama and severity of the scene and dramatic slow motion (or other music video styles edits) clog up what is already a dramatic moment. However, that’s just this lowly reviewer’s feeling and these editing tricks certainly don’t ruin what is a stylish, well-made and powerful short film. If you are looking for something a little different with a dark edge, then seek out ‘Dog’.