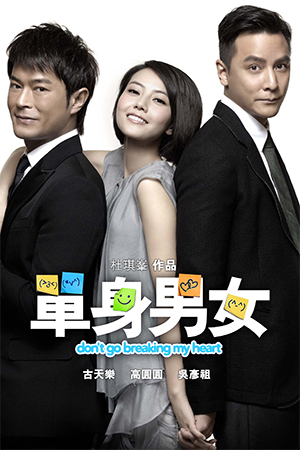 Johnnie To seems determined to confound those who would guess his next directorial step. After a few years of acclaimed thrillers – from the two ‘Election’ films to ‘Vengeance’ – To and trusted writer Wai Ka-Fai decide to re-enter the rom-com genre, a good decade after their last contribution to it.

The film begins with sweet-natured mainlander Zixin being unceremoniously dumped by her boyfriend (Yin) and left utterly dejected. While she ambles through the Hong Kong streets with tears welling in her eyes, Zixin meets Qi Hong (Wu), a beggarly young man who is a trained architect, but has opted out of the world and satisfies himself only with alcohol. Qi manages to change his new friend’s perspective while her breezy disposition encourages him to straighten out his life.

Meanwhile admiring fund manager Shen (Koo) has his eyes firmly fixed on Zixin who works in the glass fronted building opposite his office. Although he organises a date with her, Shen ruins his chance and the two do not meet again. This all changes three years later when, having seen his own business fail, Shen is appointed Zixin’s boss and decides to resume his charm offensive. Yet Qi has also returned to Hong Kong and is now a rejuvenated, successful architect who has never forgotten the kindness shown to him.

As might be expected by the talent behind the lens, ‘Don’t Go Breaking My Heart’ is slick, assured and is careful not to outstay its welcome. In a genre that has been bloated by additions that have ignored at least one of these three qualities, that counts for something. Johnnie To has the skill of making his three person dynamic the kernal of the entire hustle and bustle of the cities, never allowing their relationships to be overshadowed by pretty, yet empty cinematography.

While To and writing partner Wai Ka-Fai fashion something involving from a standard conceit, ‘Don’t Go Breaking My Heart’ is unlikely to be remembered in their respective canons in years to come. To has become one of the most accomplished directors in Asia over the past twenty years, showing an aptitude within a variety of genres that would be the envy of great film-makers worldwide. This enjoyable, pleasingly quirky rom-com is unlikely to cement his reputation among those unconvinced of To’s excellence.

‘Don’t Go Breaking My Heart’ is aided by three stars who add the vital spark to the story. So many other genre flicks have been severely lacking in this department – pretty much an essential you would think – so experiencing a Wu/Koo charm offensive is a massive plus. Meanwhile Mainland newcomer Gao Yuanyuan is utterly beguiling as the absurdly cute heroine.

Kudos for director and writer for refusing to be pigeon-holed, avoiding the safety of the violent thrillers that have recently been their major output. That said, ‘Don’t Go Breaking My Heart’ is lightweight entertainment but never threatens to be even more, despite a few sweeping romantic theatrics.