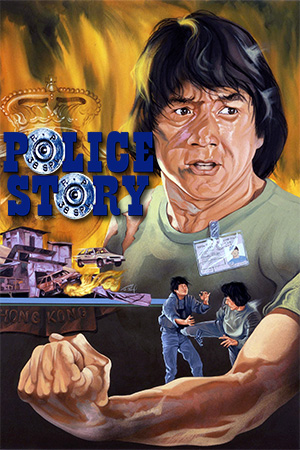 Whilst on the trail of local crime boss Koo, the HK Police turn a routine bust turn into a catastrophe. Thankfully, local supercop Chan Ka Kui (Chan) apprehends the suspect but his excessive use of force winds him in the middle of court proceedings.  In an attempt to rectify the situation, the police take Koo’s secretary into custody in the hope that she will testify against her boss but she seems unwilling to divulge any information.  Ka Kui is assigned to protect her whilst enquiries continue so he decides to push proceedings into overdrive by staging a fake killer to scare the girl into giving evidence.  His plan backfires somewhat though when real killers turn up and force him to fight them off but at least it does the job of scaring the secretary into giving evidence.  However, Koo devises a plan to frame Ka Kui so that he is wanted by both sides of the law, destroying all credibility in any testimony.  Unable to prove his innocence and with no one at hand to help, Ka Kui takes the law into his own hands and goes after Koo in a spectacular showdown.

After his disappointing attempt at an American cop movie in the form of ‘The Protector’, Chan decided that his next homegrown project would borrow the Police scenario to show a certain director exactly how it should be done.  The resulting effort was ‘Police Story’ – a mix of Chan’s distinctive style of kung fu comedy with a very American genre that resulted in one of Chan’s (and Hong Kong’s) finest films to date.  Showcasing his unique brand of excessively dangerous stuntwork combined with his superb fight choreography, ‘Police Story’ set the benchmark for all of Chan’s films to follow. It also gave him the chance to bring his directorial skills to the fore and prove to the audience that he was capable of crafting and moulding an entire film production to meet his needs.

‘Police Story’ is one of the best examples of 80’s Hong Kong cinema at its peak, with so many amazing elements that make it a joy to behold.  No doubt most Asian movie fans’ already own this gem, but if by some odd twist of fate you are yet to experience its excellence then do yourself a favour and pick it up today.