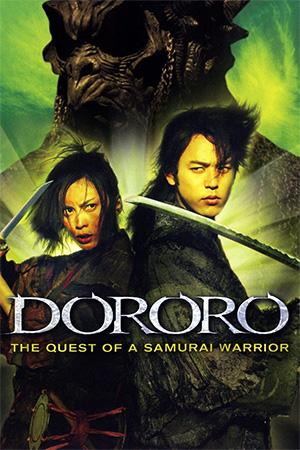 Based on the Manga series by one of the medium’s founding fathers, Osamu Tezuka (‘Astro Boy’, ‘Metropolis’), ‘Dororo’ is a wickedly inventive flight of fantasy featuring monsters, demons, comedy, striking visuals, heart and oodles of inventive action. Hyakkimaru (Tsumabuki) is a wandering soul searching for the forty eight demons that stole forty eight of his body parts. His real father Daigo Kagemitsu is a tyrannical samurai who made a deal with the demons to win all future battles and have power over the land in return for the forty eight body parts of his then unborn son. Abandoned by his real parents, Hyakkimaru is taken in by a kindly old man who fashions surrogate body parts for him and raises him to be a fierce warrior. On his quest to slay the forty eight demons Hyakkimaru is joined by feisty thief Dororo (Shiibasaki), who is fascinated by Hyakkimaru’s quest and the fact he has samurai swords for arms! They form an unlikely but ever growing closer alliance as they set out across the demon infested badlands in search of Hyakkimaru’s missing body parts and take revenge on the father who cursed him.

Akihiko Shiota’s film is an absolute creative delight. Taking its time to weave the story of Hyakkimaru and Dororo the film is an unpretentious and uncomplicated fantasy that excels in design, composition, action and acting. At its heart, it’s the tale of the two leading characters: a quiet, lost but confident young man and a loud, sassy and ultimately lovable young woman thrust into a weird and dangerous world where they only have each other to rely on. Their growing affectionate relationship is given time to blossom as the two come to terms with the escalating violence and threat to their lives around them. While the outlandish monsters and set pieces are piled on, Shiota wisely and effectively balances his film with spectacle and character. The fantasy and monsters never dominate the film, the characters in this wacky world given time to breathe, meaning come the final third an emotional stake has been raised as Hyakkimaru and Dororo face their ultimate battle. The two young actors are excellent especially Ko Shiibasaki (from ‘Shaolin Girl’ and ‘Battle Royale’) who is absolutely delightful as the constantly excitable character Dororo. While she might not be the main focus, despite the film being named after her, Dororo is just as important to the plot as Hyakkimaru. Shiibasaki, despite having to shout a lot, infuses the character with such charm and tom-boyish affection she brings a uniquely feminine vibe to a genre dominated by males. Despite all the inventive visuals, it’s her firecracker performance that makes the film so memorable.

But as well as the infectious characters, ‘Dororo’ is packed with visual delight and inventive monster fueled combat. Utilising both CGI and practical effects and shooting much of the film in beautiful New Zealand, ‘Dororo’ has a fresh and eye popping look. Great production values, coupled with a distinctly and much appreciated uncomplicated approach to the filming and editing, give ‘Dororo’ an often epic look and the film is stuffed with weird and wonderful creations. See our heroes do battle with Giant Lizards, Tree Monsters, Spider Crab Demons, Flying Vulture Men and encounter giant and freaky looking Spirit Babies, a group of Identical Girls that turn into horrible, slimy Larvae and freaky Mutant Dogs. The CGI may not always hold up but it is strikingly surreal and fits in with the fantasy vibe of the film. Mercifully ‘Dororo’ isn’t saturated with CGI creatures and nonsense (unlike a lot of modern day fantasy flicks) and the makers refreshingly rely as much on the practical effects as they do the computer generated ones. Which means in many of the big action scenes, animatronics, wires and good old fighting is utilized to give them a very stylized but convincing execution. In fact, much of the top notch blistering action is choreographed by Hong Kong stalwart Ching Siu-Tung (‘Hero’, ‘House of Flying Daggers’) meaning that while there is a lot of wire work the action is always crisp and clear and a joy to watch: a nice mixture of swordplay, monster fighting, wirework and good old one-on-one bootwork.

Add in striking scenery, a good dose of comedy (including an excellent running gag in which ‘Dororo’ keeps getting covered in blood from the slain demons) and an endearing sense of fun and ‘Dororo’ is quite frankly one of the best examples of creative, Manga inspired Japanese cinema. Great characters, action and design make this an excellent fantasy adventure which harks back to the fun time fantasies such as ‘Willow’, ‘A Chinese Ghost Story’ and, yes, even ‘Krull’. Wicked fun.