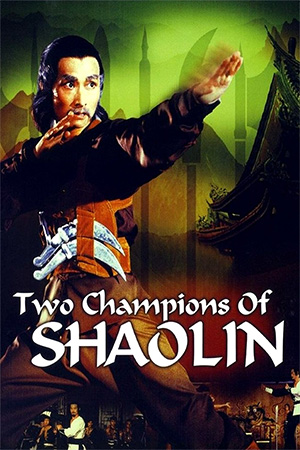 Chang Cheh is no stranger to the legend of Shaolin and, in particular, its destruction and subsequent rebellion against the Manchus. Popular Cheh films like ‘Five Masters Of Shaolin’, ‘Men From The Monastery’ and ‘Heroes Two’ have all examined the subject in detail and all painted the familiar Shaolin-good vs. Manchu-bad picture throughout. ‘Two Champions Of Shaolin’ managed to be interesting for two reasons:  firstly, it was one of the last Venoms films made and, significantly, doesn’t feature Kuo Chui (although he helps choreograph it); secondly it adds more depth to the famous historical conflict, something that few films have succeeded to do. These aspects make for fascinating viewing.

The Manchu-backed Wu Tang clan carefully plan their next move in the fight against the rebellious Shaolin fighters who have dispersed into the countryside. The ideal opportunity comes when influential Shaolin pupil Tung Chin Chin (Lo Meng) arrives in town looking for contact with kung-fu brother Hu Hui Chen. Sending out a deadly knife fighter, the Wu Tang clan succeeds in inflicting a severe injury on Tung who stumbles away and is rescued by a brother and sister team. While recovering, Tung learns how to counter the knife attack from the pair and also falls in love with the sister. After taking revenge and defeating the Wu Tang killer, Tung, his new friends and Hu Hui Tien (Chiang Sheng) humiliate the clan and leave their reputation in tatters. Wu Tang however plan a vicious revenge and, on the wedding night of Tung, they kill his bride and decimate the guest list while capturing the groom. One of the few survivors is Hu and his next move is to locate and rescue his Shaolin brother. Help for the hero comes in the unusual shape of the adopted nephew of the Wu Tang leader who secretly frees Tung and reveals himself to be a Ming patriot. Now the furious enemy call on the services of notorious Manchu fighter Kao (Lu Feng) and his deadly allies the Yuen brothers. Once again the pro-Shaolin and pro-Wu Tang forces go head-to-head in a tactical battle that culminates in the arrival of the likes of Fong Sai Yuk to help the cause.

What starts off in a very prosaic and none too exciting manner quickly develops into another winning entry in the Venoms’ pantheon. Instead of just providing a straight-forward storyline that will be anticipated by veteran genre fans, Chang Cheh attempts to not only flesh out the characters, but also to twist a very well-worn path. For the most part, Chang Cheh’s deft touch achieves its goal and ‘Two Champions Of Shaolin’ develops into a fine addition to his illustrious filmography. He also cranks up the tension especially near the end; when Lu Feng enters the narrative, the audience is left to wait until the supervillain finally shows his true colours. There are many reasons to watch this late Venoms film, even though Kuo Chui sadly doesn’t appear. However, there are undoubtedly flaws and one of these is the simple fact that Kuo Chui is the lynchpin of the Venoms team and a production without him can never be considered with the best. There’s also too many ideas in terms of characters which means that the duration is full of famous kung-fu characters who are barely touched upon (i.e, Fong Sai Yuk, Pak Mei). By the end it seems like Chang Cheh has crammed too many ideas into the film and therefore the big clash at the end cannot fully utilise the scope of his vision. ‘Two Champions Of Shaolin’ is nonetheless an accomplished production that never takes the easy way out to the characters’ dilemmas; Chin Siu Ho’s role is one of a particularly torn patriot who has been brought up by the Wu Tang teacher and must decide which side to stand on. Vitally, the duration is full of exquisite action that increases in quality as the film progresses. Although Kuo Chui’s usual presence as hero is missed, Lo Meng rises to the challenge and is again utterly compelling as the lovable muscleman and Chiang Sheng is a joy to watch. Fine entertainment and another classy Venoms film.