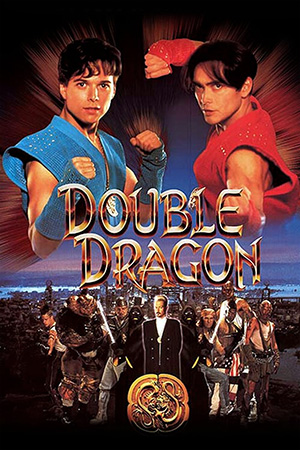 At times ‘Double Dragon’ looks like somebody just puked up the 1980s all over the screen. Other times it’s actually kinda fun. No really. Bad fashion, hideous colours, crazy make-up effects and over-the-top acting make this video game adaptation a trash classic. Throw in future martial arts legend Mark Dacascos, Robert “T2” Patrick having a ball as the bad guy, Alyssa Milano as the leader of a tough street gang (again, no really!) and ‘Double Dragon’ is a hoot.

How close it sticks to the game, I have no idea. Two brothers (Dacascos & Wolf) in the future have one part of some legendary medallion called the Double Dragon and Robert Patrick has the other part. Each side wants to get hold of the piece they don’t have and lots of chasing, fighting and “hilarity” ensue. The future is a day glow nightmare with gangs dressed up in all kinds of ridiculous costumes and despite violence, evil corporations and, well, everything looking like it’s gone to shit, everyone seems to be having a great time. Luckily the film never stops to take itself too seriously, the makers seem to know it’s a load of old hokum and even some of the wisecracks work. Yep, some parts are genuinely funny not unintentionally. Though there are plenty of those as well.

The effects, in the early days of CGI, hold up surprisingly well and there is some inventive, if occasionally clunky, action. Dacascos provides most of the best fight moves and there are plenty of chases involving silly looking cars and jet skis (!). Loud and dumb it may be with colour and set design that may cause bouts of nausea, ‘Double Dragon’ is nevertheless hokey, early 90s excess with cool performances from Mark Dacascos and Robert Patrick.