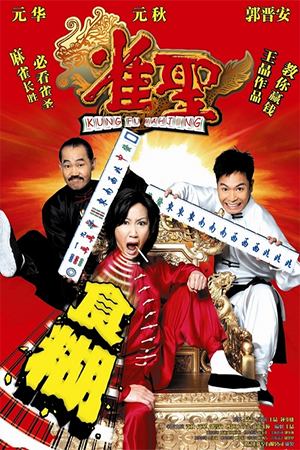 Picture the scene: Stephen Chow has just shouted ‘It’s A Wrap!’ (or probably some Cantonese equivalent) at the end of the filming of ‘Kung Fu Hustle’. Everyone is aware that this will not only be a massive hit in Hong Kong, but will possibly send ripples throughout the cinematic world. The exact moment this scene is played out, Wong Jing (possibly dressed as a thief with a big sack draped over his shoulder that has ‘swag’ written on it) enters and whisks away the two main stars of ‘Kung Fu Hustle’, taking them to his secret lair to start work on his latest diabolical plan for world domination. Perhaps this may be embellishing the truth a little, but not by much. ‘Kung Fu Mahjong’ takes Yuen Wah and Yuen Qiu – essentially playing the same characters as they did in the Chow classic – and throws them into the insane world of Wong Jing without the aid of a safety net.

Running away from gangsters to whom he owes money, Chi (Wah) hides in a busy city restaurant until the heat dies down. During his brief stay there, Chi meets the extraordinary waiter Wong whose ability to memorise orders is legendary in the area. Chi sees this remarkable gift as a way of making money and tries to persuade Wong to join him on the mahjong circuit. Unfortunately for both parties, Wong’s guardian Fei (Qiu) flatly refuse to allow her impressionable charge to associate with the nefarious elements of the gambling world and threatens Chi with a severe beating if he goes against her wishes. Wong is eager to try out his skills though and decides to sneak out of the house to learn from Chi. Initially their partnership bears fruit and their name spreads throughout the mahjong world. This infamy brings them to the attention of notorious gangster Tin (Jing) who has Wong beaten so viciously that the ensuing head wounds give him the mental age of a boy. Though Fei is furious when she discovers what has happened her main goal is now to help him recover and plan their revenge, with Chi happy to take part.

Even to the mahjong aficionado, the sight of countless games played out on the big screen must be far from entertaining. To the rest of us, it’s about as interesting as watching someone else watch paint dry. The plot is a mere conduit for these games and throws a number of very familiar scenarios into play to help the mahjong take centre stage. Jing recalls the basic premise of ‘God Of Gamblers’ but ensures that none of the wit or charm of his previous hit remains. The director seems blissfully unaware that a film can be as absurd and surreal as it likes, but good, involving characters are the only sure way to make pathos affective. Jing throws together his usual array of crass jokes, completely overblown sight gags and melodrama though there is simply not enough quality or star power for any of it to work.

In many ways ‘Kung Fu Mahjong’ is like the tasteless economy or ‘value’ brands that litter supermarket shelves – yes, it may only be 3p for a tin of beans, but it is so watered down and questionable in content that it bares very little relation to the real thing. Wong Jing’s work is a very diluted pastiche of other people’s work, from Quentin Tarantino to Stephen Chow; ‘Kung Fu Hustle’ is shamelessly plundered as is ‘Shaolin Soccer’ and ‘Kill Bill’. Jing doesn’t turn these into clever parodies ala ‘Airplane!’, he just borrows iconography from the aforementioned films as if their mere appearance should be applauded.

‘Kung Fu Mahjong’ is tiresome and uninteresting, but never bad enough to make it unintentionally amusing. Wong Jing beats us into submission with numerous mahjong sequences, adds some poor computer effects (a bit like adding cheerleaders to a game of croquet to generate excitement) and spews it at the viewer complete with much shouting. Not only does this approach play havoc with your home theatre set-up, it also makes you question the very nature of cinema itself. Nevertheless, if you approach a film of this nature, with this cast, with this storyline and with this lack of imagination, there is very little sympathy you (or indeed I) should expect.