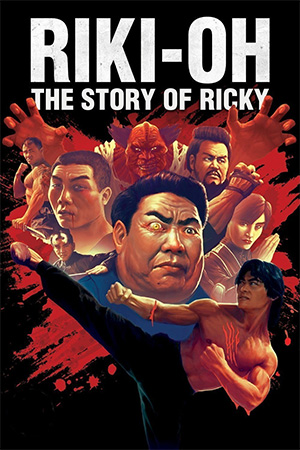 Due to the fact that it has often been banned or censored, ‘Riki-Oh: The Story Of Ricky’ is a film that has garnered quite a reputation over the years.  Now that it is freely available in its uncut form though, is it as exciting as we have been led to believe or has the fuss all been about nothing?

In the year 2001, prisons have now become a business that are ruled over by corrupt wardens and their henchmen. From one such prison emerges Ricky – a wrongly convicted inmate who is extremely adept at fighting and very hacked off.  When the tough guys on his cell block start causing trouble, it doesn’t take Ricky long to take justice into his own hands and he begins dishing out punishment with his fists.  As his activities begin to draw the attention of the people in charge, Ricky soon becomes the top of quite a few hit lists and he is bombarded by numerous assassins.  Will Ricky’s unique approach help him bring down the crooked management or will he find himself on the fast track to death row?

Based on a manga by Masahiko Takajo and Saruwatari Tetsuya, ‘Riki-Oh: The Story Of Ricky’ tells the simple tale of one man trapped inside a corrupt prison. This is certainly no ‘Shawshank Redemption’ though, and if you’re expecting anything even remotely serious then you should probably give this one a wide birth. If however, you’re a fan of exploitation cinema then prepare yourself for one hell of a crazy trip. Loaded with larger-than-life characters and absolutely overflowing with gore, ‘Riki-Oh: The Story Of Ricky’ is an insane outing that hops from one bizarre confrontation to another. Played entirely straight by everyone involved, it all winds up being pretty darn hilarious and is immensely fun if you’re in the right frame of mind.

When it comes to action, ‘Riki-Oh: The Story Of Ricky’ isn’t your typical Hong Kong affair either. While there are talented martial artists mixed in amongst the cast, they rarely use their abilities in the way you would expect. Sure, there’s some punching and kicking, but it’s certainly not intricately choreographed or anything to get too excited about. Instead, it’s the superhuman abilities that shine through and it’s definitely more about the violent outcomes rather than anything else. Featuring everything from eye gouging to head crushing to limb ripping, it’s a real sensory overload that certainly recalls the likes of ‘Toxic Crusader’ or ‘Dead Alive’. And much like those aforementioned outings, it’s all made on a shoestring budget and yet somehow still far more appealing and entertaining than the majority of horror blockbusters.

‘Riki-Oh: The Story Of Ricky’ is unlikely to impress if you’re looking for any kind of original or fight-filled feature. If you appreciate trash cinema that is packed full of hilariously over-the-top violence though, you’ll certainly find plenty to enjoy here.