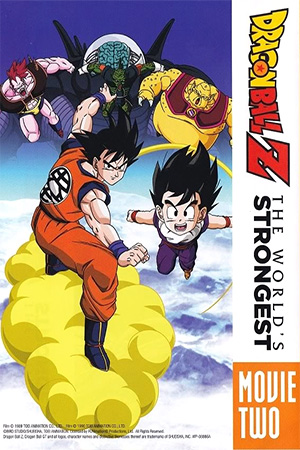 When the evil Dr. Kochin acquires all seven of the magical dragon balls, he uses their power to resurrect his mentor, Dr. Wheelo. Unfortunately, Dr. Wheelo’s body was destroyed by the avalanche that killed him fifty years ago, so now he must acquire a new vessel if he is to have any hope of taking over the world. Believing Master Roshi to be the world’s strongest warrior, he abducts Bulma in an effort to force Roshi to hand over his body. Meanwhile, Goku has already gotten wind of the kidnapping and is on his way to try and save the day.

This second movie outing for the ‘Dragon Ball Z’ franchise is pretty much a case of more of the same. Utilising a plot line that is not a million miles removed from sections of the show, the film finds our heroes forced into action when yet another evil villain threatens to destroy/take over the world. The resulting effort is a fairly run-of-the-mill adventure that often feels like little more than an excuse for another series of fight scenes. While it is hard to argue against this, thankfully the film still remains watchable thanks to the introduction of some entertainingly silly bad guys as well as the usual quota of comedy antics from the core characters.

When it comes to the action, ‘The World’s Strongest’ is a definite notch up from its predecessor. Although it’s set not too far into the series timeline, a few of the character’s have already increased their powers which makes for a couple of standout battles. Probably the most notable of these is Goku’s battle with the three henchmen, as they all possess very different skills that require a little more thought and effort if he is to have any hope of beating them. As for the battles featuring some of the other main characters, these are perhaps not so enticing. Gohan once again seems to show hints of promise but delivers very little, while Kuririn appears to have been resigned to nothing more than comic relief. However, everything is wrapped up nicely as Goku uses his newly learned techniques (the Genki Dama and Kaio-ken) to allow for a fantastically animated finish.

If you’re a fan of ‘Dragon Ball Z’ then you really can’t go wrong with ‘The World’s Strongest’. It’s nothing particularly new or flashy, but it is filled with enough action and comedy to leave you smiling once the final credits roll.