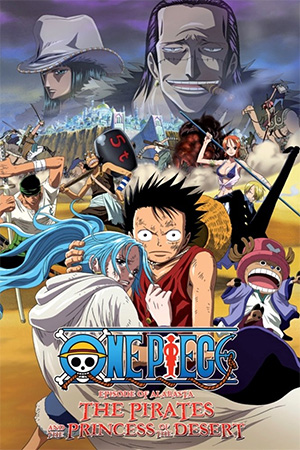 The island kingdom of Alabasta is about to erupt in civil war – a war engineered by the evil Crocodile, one of the Seven Warlords of the Sea (Shichibukai), and his criminal organization Baroque Works. Monkey D. Luffy, his Straw Hat pirates, and Princess Vivi race to the island, where the strongest warriors of Baroque Works wait to stop them. Can Vivi and her friends stop an entire war? And how can Luffy fight Crocodile, when Crocodile can turn into sand?

This eighth ‘One Piece’ movie is the first in the series not to utilise an original storyline and is instead a condensed retelling of the 40 or so episodes from the Alabasta arc. In theory this sounds like a winning formula but sadly the execution leaves a lot to be desired. The biggest issue lies with the story itself, as the producers seem incapable of filtering out the important plot points. No attempt is made to explain how the Straw Hats wound up in their current predicament and key new characters, such as Vivi or Karoo, are just thrown into the action without any kind of introduction. This approach makes it practically impossible for the audience to become emotionally involved in the events that ensue, as well as totally alienating the casual viewer. Meanwhile, long-time fans of the show will be extremely disappointed by the loss of certain scenes, particularly some of the comedic highlights which are sorely missed.

Surprisingly, this slice ‘n’ dice attitude also extends into the action and several of the major fights are edited down to become nothing more than footnotes. In the series the henchmen battles were stretched over a number of episodes and gave each of the crew their chance to shine. Here they are cut down to just a few minutes combined, and they only include a couple of finishing moves before the scene ends with an abrupt freeze frame. On the plus side though, there is some redemption to be found in the finale which features an extended version of the fight between Luffy and Crocodile. Even though the lack of a proper build up reduces the emotional intensity, this is still a fantastic fight and the new animation only makes it look even better.

Although the idea had potential, ‘One Piece: Episode Of Alabasta’ doesn’t work simply because it is so poorly put together. Existing fans will no doubt spend the majority of the movie bemoaning the loss of certain key scenes, while newcomers will be left scratching their heads throughout. Do yourself a favour and just watch the episodes from the show, they are far more satisfying and cohesive than this could ever be.