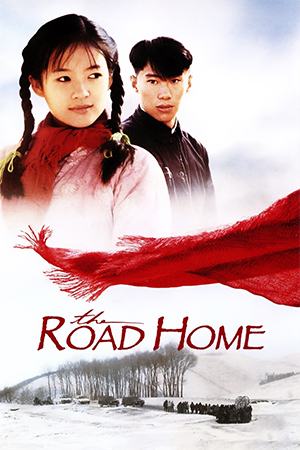 When a well-loved resident of one of China’s more distant villages dies, the local community is shattered and the far away son, Luo Changyu, is asked to return to organise the funeral. On arriving back in the town he has long since left, Luo sees his distraught mother who is barely able to come to terms with the death of her beloved husband. The mother, Zhao Di, asks her son to lead a funeral procession with the coffin that will take in the original road he used to arrive in the village many years before. As they plan this unusual ceremony, the mother tells her son the now fabled story of his parents courtship and how their love conquered all the trails they faced. The young Zhao Di (Zhang Ziyi) is the most beautiful and certainly the most sought-after young woman in the village though she has little interest in the many offers of marriage she receives. Her feelings change when a young teacher arrives in the village to help out at the local school and immediately their eyes meet across the crowded welcoming party. As time goes by, Zhao and the young teacher Luo Yu Sheng gradually fall in love and the whole village is very keen to encourage their romance. However, their delicate love is shattered when Luo is ordered to return to the big city by the authorities and given no indication as to when he can return. Nonetheless, love conquers all and the couple are reunited after Luo bravely risks punishment to return to the village for just one day.

Rarely has the simple theme of love been given such a spellbinding presentation as Zhang Yimou’s ‘The Road Home’. Having made his name as a director of politically-challenging Mainland dramas, Zhang now enchants viewers with this exquisite story of an innocent and heart-warming courtship between two appealing leads. Not only does the searing beauty of their love hypnotise the viewer, but the rich vistas of the Chinese countryside also add to the effect; the overall power remains in the memory long after the final frames. Some viewers may argue that the storyline is slight and lacks the substance required of exceptional films. Perhaps this may be true as there is little beyond the central narrative; however, that may be to miss the point of ‘The Road Home’. There are few productions that can boast the sheer grace of this splendid ode to love. Zhang Ziyi (forever to be remembered for her role in ‘Crouching Tiger, Hidden Dragon’) is a major reason for the previous commendation that I have afforded the film. Her astounding beauty coupled with a touching fragility means that the love she displays is totally believable. ‘The Road Home’ is a genuine achievement of Eastern cinema and comes highly recommended.