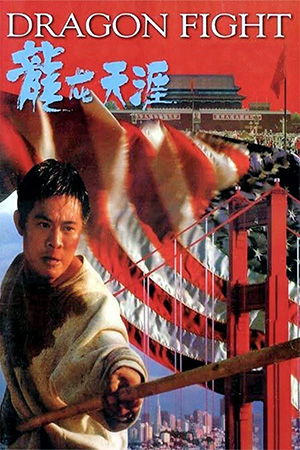 Jet Li and Dick Wei play two Mainland Chinese Wu Shu performers who are touring New York with their troupe. Wei makes no secret of his desire to leave his Chinese homeland and seek the supposed prosperity of the Western world. Taking one such opportunity to do so, Wei absconds from his friends and disappears into the busy city setting. Li searches for his fellow athlete and, on finding him, desperately tries to convince him to return to the troupe. Unfortunately not only does Wei flatly refuse and again runs away, but Li misses his own flight and is therefore stranded in the U.S. Li decides to stay in the vain hope of persuading Wei that he is making a major mistake by staying in a city where he is a stranger. To this end Li begins working at a local Chinese restaurant and befriends a delivery boy (Stephen Chow) who organises shelter for him. Meanwhile Wei joins a local triad gang and quickly forges a reputation as a no-nonsense fighter who is a more than able foot soldier. His progress is quick and before too long he is helping to run a triad operation. When Chow’s considerable debts mean that he is ‘visited’ by the local thugs, Li jumps into help and swiftly dispatches the foes. As things reach fever pitch, Li is once again face-to-face with his former colleague who is now a fully-fledged triad leader. It is now Li’s responsibility to put aside his personal feelings and take Wei to the authorities.

This interesting early Jet Li film has become increasingly hard to find on any format. Due to his new found popularity though, this may not be the case for much longer. To Li fans who haven’t watched this yet, ‘Dragon Fight’ offers a good chance to see their hero in action. It certainly doesn’t rank as his best, but it is still a solid action drama that has the added bonus of an early role for Chow. It is intriguing watching two of Hong Kong’s great screen treasures acting alongside each other before either were huge stars. The film suffers from inconsistent pacing with a good opening, a relatively slow middle section and an excellent climax – featuring some blistering fight action. This fact means that it cannot be regarded as a classic or even a ‘must-see’, but there are enough good reasons to watch this.