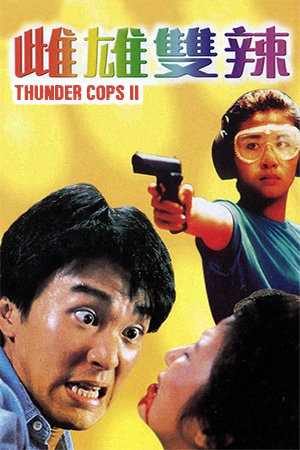 Although it features both Sandra Ng and Stephen Chow, ‘Thunder Cops II’ is a far cry from the comic capers that they are both known for.  This is in fact a dramatic take on the ‘Battling Babes’ genre that sees Ng thrust firmly into the spotlight.

Nam Tse (Ng) is a bumbling beat cop who is an embarrassment to the force and her father who just so happens to be a senior officer.  When her father is killed in the line of duty it turns her life upside down, giving her the resolve to train harder so that she can avenge her father’s murder.  Months later and Tse has established herself as a respectable Police woman so the time is right for her to muscle in on the case connected to her father’s killer.   Blocked by her seniors, Tse’s only option is to utilise her links to the underground and she soon discovers that the ruthless gangster Feistat (Fui-On) is the closest man to the murderer.  Sadly, this information comes at a price as people close to Tse get hurt but not before they point her in the direction of Feistat’s crippled brother (Chow) who appears to be the weak link. However, will he be willing to turn on his brother and do what is right or will it just be another dead end for Tse?

Despite its title, ‘Thunder Cops II’ is not a sequel and has nothing in common with Jeff Lau’s original 1989 horror-comedy. Instead, this is an extremely predictable and occasionally unpleasant action flick that offers up very few surprises. The whole revenge scenario is about as bland as you can get and the film oddly chooses to go for a very dark tone that sees innocents getting butchered left, right and centre. Sandra Ng is an interesting choice for the leading lady but sadly her character is just so damn arrogant that you practically want her to fail. Stephen Chow and Shing Fui-On do pop up at various intervals, but neither actor really has anything substantial to work with and it generally feels like a waste of their talents. The only minor redemption comes in the form of Yuen Cheung-Yan’s action, which dishes up some decent shoot outs and one notable fight featuring Ann Bridgewater. Sadly though, even these few flashes of fun are spoiled by the incessant slow motion and over-the-top undercranking.

‘Thunder Cops II’ is an uncharacteristically poor Jeff Lau movie that really has very little to recommend. Admittedly some of the action is passable but the rest of the movie is generally so damn depressing and sloppy that I wouldn’t personally want to sit through it again.