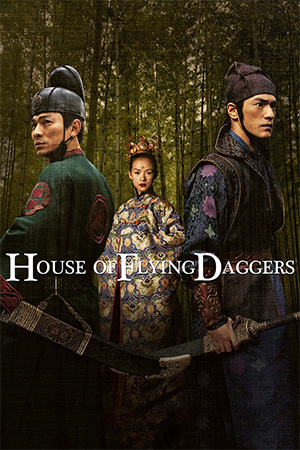 While ‘Hero’ was earning belated plaudits from the West, Zhang Yimou’s return to the swordplay genre was impressing viewers and critics alike in the East. Yimou’s current muse, Zhang Ziyi, is once again given a leading role in another lavish mixture of opulent visuals, strong performances and Ching Siu Tung’s stellar choreography. However, ‘House Of Flying Daggers’ suffers from many of the problems that films have recently encountered when trying to reinvent a well-established genre.

Imperial agents Leo (Lau) and Jin (Kaneshiro) are in charge of a ruthless unit of government soldiers who have been ordered to wipe out the various rebel sects that are beginning to appear. A particularly notorious clan are known as the ‘Flying Daggers’ – a highly skilled group who are determined to spark a revolution in the powderkeg atmosphere of ancient China. Leo hears that one of the ‘Flying Daggers’ is in the area and assigns Jin the task of winning her favour. The target is a blind swordswoman named Mei (Ziyi) who is arrested by Leo and threatened with torture unless she discloses the whereabouts of her comrades. In a meticulously orchestrated rescue, Jin saves Mei and begins to gain her trust, slowly gathering information as he does so. While Jin passes the details onto Leo and Mei seems blissfully unaware, the end of the ‘Flying Daggers’ is inevitable. Nevertheless, the plan is put under threat by Jin’s increasing infatuation with his beautiful companion and the hidden motives of just about everyone involved.

It would be practically impossible for Zhang Yimou to rival the visual potency that ‘Hero’ presented and it is therefore unsurprising that ‘House Of Flying Daggers’ doesn’t compare in this department. Importantly though, Yimou and cinematographer Zhao Xiaoding still manage to compose a number of splendid cinematic moments that will resonant long after the memory of the film has faded. The final third of the production is bathed in a number of shades of vibrant greens that create a stunning treat for the eyes. Kudos for Xiaoding is obviously well earned, therefore.

As with ‘Hero’,  ‘House Of Flying Daggers’ generates much for the eyes, but little for the heart. The immaculate look of the film can only carry it so far and, when the power begins to subside, the viewer is left with a production that is emotionally lacking. There seems to be a license that allows arthouse films to have the luxury of ignoring such things as the narrative or plot twists. If a more commercial venture had such a lack of concentration on the storyline near its conclusion, it’s hard to believe that it would be so easily forgiven. Make no mistake, Yimou constructs a film that holds the attention, but he still leaves some gaping holes showing during the last twenty minutes; when the focus switches from the hunt for the rebels to the love triangle the whole production lurches into melodrama. The said love triangle could have been effective had it not been moved to centre stage at the cost of every other element. Such a flaw means ‘House Of Flying Daggers’ is some way from being a classic.

‘House Of Flying Daggers’ may suffer from the same emotional anaemia that afflicted ‘Hero’ and ‘Crouching Tiger, Hidden Dragon’, but it’s still a work that oozes quality. Obviously the aforementioned weaknesses are a major stumbling block, but the sheer visceral thrill it often generates is often impressive. As with ‘Hero’, Ching Siu Tung designs action that is inventive and, unlike ‘Crouching Tiger, Hidden Dragon’, owes more to traditional choreography than ballet. The excellent rescue scene in the prison is full of brief, but impressive bootwork action that hasn’t been seen in Hong Kong for a while. Even when the weaknesses come to the fore, such quality is hard to ignore.

Zhang Ziyi – whose name is quickly becoming synonymous with the genre – is again radiant as the beautiful Mei, glowing with confidence and a paradoxical fragility. The material may not be especially involving, but her character here is a more intriguing stretch of her abilities than her supporting role in ‘Hero’. Ziyi has successfully graduated from her petulant character of ‘Crouching Tiger, Hidden Dragon’, now becoming an actress whose future career choices look quite promising. Her two supporting actors add their own varied qualities to their roles with the end result that, although ‘House Of Flying Daggers’ can be criticised for some things, the strength of the acting is certainly beyond reproach.

As I said in my review of ‘Twins Effect II’, there must be a middle ground somewhere between the ludicrous, ‘zany’ swordplay film and the emotionally detached ones. ‘House Of Flying Daggers’ does, to its credit, try to stir up a few more emotions than recent efforts have – even if it becomes a little preoccupied with this ‘inner turmoil’ by the second half. Any work as visually splendid as this demands an audience and it is always encouraging seeing a film that hails from a ignorantly derided genre making waves around the world. Nonetheless, ‘House Of Flying Daggers’ has too many trappings of an arthouse production that screams ‘self-conscious’ throughout. By the end of the two hour running time then, little deep impression is left in the viewer.