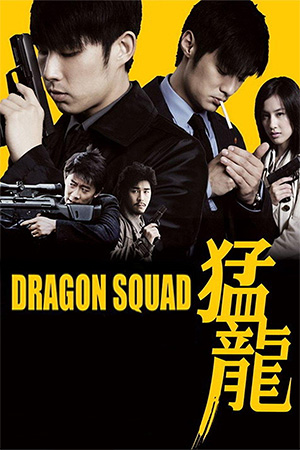 In 2005, action fans were thrilled at the prospect of not one, but two new “big” action films to emerge from Hong Kong.  ‘Dragon Squad’ and ‘Sha Po Lang’ both boasted all-star casts and were hailed as state of the art action films that would breathe new life into a tired genre.  As it turned out, only one of these films delivered in the action department and offered a good account of it’s leading stars… sadly, it wasn’t ‘Dragon Squad’!

When big-league triad boss Tiger Duen is arrested and put on trial, a team of young Interpol agents from around the globe (as well as a couple of local rookies) are assigned to give testimonies for the case.  On its way to the courthouse, the convoy transporting Tiger is attacked by a well equipped terrorist team and Tiger escapes at the cost of numerous cop’s lives.  Seeing as how they witnessed the ambush, the Interpol team are keen to try and track the men responsible but the local authorities don’t want them involved so they are placed in the care of veteran cop, Kong Long (Hung).  As the case unfolds, it turns out that the gang are made up of international terrorists known to Long but due to personal issues, he is reluctant to get involved.  However, as the body count rises and the Interpol agents continue to harass Long, he decides to strap on his guns for one last time and lead his newly assembled team into the thick of the action.

‘Dragon Squad’ is one of those bizarrely concocted films that attempts to target both Eastern and Western audiences by utilising languages, stars and a crew from both sides of the globe.  In the past, this combination has normally proven to be a recipe for disaster and sadly, ‘Dragon Squad’ is not the film to buck that trend.  On this occasion, most of the angry finger pointing and filthy stares can clearly be aimed towards director Daniel Lee, as he is the main culprit responsible for spoiling the film’s real potential.  First and foremost, this is due to his awful approach towards shooting with a number of irritating editing techniques, ranging from the shaky handheld camera to an over reliance on the supposedly stylish black and white slow motion shots.  Used in moderation these effects can sometimes give a movie an edge, but Lee never allows the camera to stay still long enough for the audience to settle and the overall look of the film is nothing but a distraction from the very beginning.  As if this wasn’t bad enough, Lee also spoils the films quintessential gunplay sequences by concentrating on close-ups of the actor’s faces rather than show where the bullets are flying.  This might be okay if the scenes were short lived, but it is even more frustrating in this world where no one appears to be capable of shooting straight and the confrontations seemingly last forever.

Mr. Lee is not the only one at fault here though, as the assembled cast of actors must also shield some of the blame.  In particular, I’m going to single out Vanness Wu (and at the same time, face the wrath of a thousand screaming teenage girls) as he truly is a terrible choice for the leading hero.  Beyond his pretty boy looks and grasp of the English language, the man brings absolutely nothing to the acting arena and his line delivery is so bad that even an extra on ‘Baywatch’ would be blushing.  However, he is not alone as every single one of the leading actors manages to put in a bland and totally uninspiring performance, while even the supposedly established Western star, Michael Biehn, looks extremely old and tired throughout.  The award for worst dialogue though, must surely go to Li Bing-Bing and Xia Yu for their cringe-inducing romantic banter that is laughable and completely unbelievable.  In fact, the overall script and concept are atrocious throughout, as not only is it heavily clichéd but it also opts to give every single character a background that is littered with plight (brother killed in action, mother shot by criminals etc etc), removing any shred of believability.

Now, here is the really strange and nonsensical part of my entire analysis of this film that will have you all scratching your heads – there is still something about ‘Dragon Squad’ that made me enjoy it!  Call me crazy or just a desperate action junkie but somehow I still managed to come away thinking to myself “well, it wasn’t all that bad”, so now I have to try and justify that.  My first reasoning is a simple one and that is the presence of the legendary Sammo Hung who can really do no wrong in my eyes.  This year, with the aid of this film and ‘Sha Po Lang’,  Hung really has returned with a vengeance and proven once again that he can still cut the mustard in both the action and acting departments.  Alongside him, credit must also be given to Isabella Leong for her brief yet moving appearance as well as the excellent Maggie Q who, despite a distinct lack of actual lines to deliver, is probably one of the most convincing characters in the entire film.  It also has to be said that Chin Ka-Lok does do an admirable job with the action, even if the camera angles do manage to regularly spoil it. There’s some half decent gunplay and the knife duel between Sammo and Heo Jun-Ho is a particularly stand-out moment.

Even though it is littered with flaws, I feel I can’t give ‘Dragon Squad’ the complete thumbs down as it is one of those films that could easily pass for a guilty pleasure.  Whether or not you should take a chance on it depends on your tolerance for motion sickness inducing camera angles and pop stars pretending to be actors.  Or in simpler terms, if it’s cheap then get it but if ‘Sha Po Lang’ is available then opt for that instead.