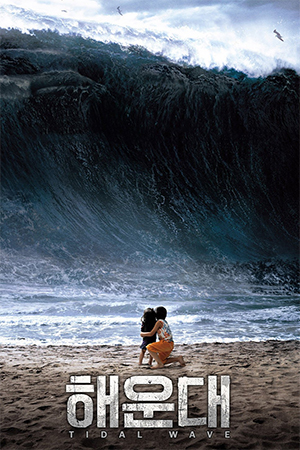 This big budget disaster movie from Korea certainly has one thing going for it: one gigantic wave that destroys everything in its path. Sadly, we the viewer, have to wade through an awful lot of so called plot and character development until the mighty wave finally makes its appearance which unfortunately makes the rest of ‘Tidal Wave’ a bit of a slog to get through. The set up is fine: due to undersea earthquakes a humongous tidal wave is making its way to the seaside city of Haeundae on the south coast of Korea and in typical disaster movie fashion we are given a set of differing characters to root for. However, you will more likely wish for them to get swept away by the giant wave as after an hour of spending time with them bickering, shouting, mugging and generally being annoying when the disaster hits chances are you won’t care whether they live or die.

As harsh as that may be, the makers of ‘Tidal Wave’ forgot one important ingredient in cooking up the perfect disaster movie: likable characters that we can root for. Despite the cast’s best efforts none of the several sets of characters we follow in the lead up to the gigantic wave hitting are particularly appealing or interesting and after much (much) shouting, screeching and over-the-top theatrics one just wishes the wave would hit already. It appears for a good chunk of the running time the filmmakers are actually producing a relationship comedy rather than a big budget disaster flick. While character development is all good and well, saving your big disaster set-piece for the last thirty minutes of the film while the rest of the running time is spent on dull and annoying comedy shenanigans and relationship woes is not the best approach. We want set pieces and we want them now.

At the risk of being too harsh on the film, ‘Tidal Wave’ certainly looks slick and when the tsunami does hit, it’s certainly well staged for the most part with a nice mixture of CGI and practical stunt work. There’s an impressive sequence where the wave hits a large bridge, a striking moment when the wave topples skyscrapers like dominos and the shot of the sunken seaside city is rather chilling. However, it’s too little too late: the payoff not being worth all the build up. Melodramatics then rear their ugly head as the characters descend into over-the-top emotional breakdowns that seem to go on forever and just include more shouting and screeching.

Nice effects work and one awesome giant wave but a whole load of tedious drama unfortunately means ‘Tidal Wave’ is sunk before it even starts.