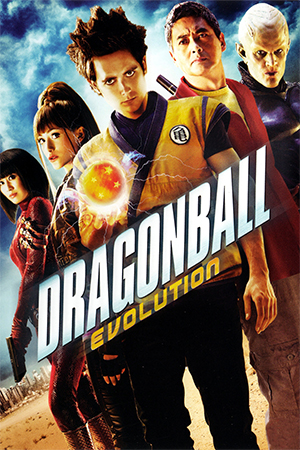 You’d think a film starring Hong Kong legend Chow Yun Fat, produced by the great Stephen Chow and based on one of the most popular Japanese anime’s would have at least half a chance at being successful? Well apparently not as when you throw Hollywood money, a crap ton of dodgy CGI and a whole load of clichéd high school teen rubbish at it, then what could have been an all out martial arts, comic book inspired thrill ride turns out to be, well, ‘Dragonball: Evolution’. Pretty much universally hated (at least judging by the rampant rage filled comments on the internet) and baring only a passing resemblance to the source material, ‘Dragonball : Evolution’ is a prime example of Hollywood not realising what they have and who the built in audience for the material are. Loud, day-glo and stuffed with ropey CGI madness, for many ‘Dragonball: Evolution’ will be the stuff of nightmares. But, to be honest, I didn’t outright hate it.

Goku (Chatwin) is your regular good looking American teen who is a bad ass at kung fu. But for reasons that only apply in Hollywood films he is seen as an outsider, a geek, a nobody. Living with and trained by his Grandfather (Randall Duk Kim) he is given one of the seven Dragonballs: mighty little red orbs that hold great power…or something. Non-surprisingly, an evil, bright green, kung fu skilled demon, Piccolo (Marsters), wants the seven Dragonballs and sets about destroying those who have them, taking the Dragonballs for himself. So, our (apparently) geeky hero teams up with another kung fu master (Yun Fat), two hot babes who can kick ass and tote guns with aplomb (one of the aspects of the film I did enjoy!) and some other “comedy relief” dude, to protect the Dragonballs, kick ass and prevent the world from being destroyed.

I’ve only casually followed the anime the film is based on and while I enjoyed it, I’m no die hard fan. I’ve seen enough to know the film only bares a slight resemblance to the show with many characters, themes and stylings jettisoned in favour of making the film more commercially viable. While it isn’t exactly true to the original show, several characters do make it on screen and there is still an ample amount of fighting action to be had, much like the cartoon. Unfortunately, there is a whole load of American high school naffness to get through, all that horrendous CGI (including an awful sojourn to some kind of volcano/magma land which just looks awful) and the fact Piccolo (a pretty cool James Marsters) is only in a few scenes and pretty much wasted despite everyone banging on about him all the time.

Many will probably be alarmed that Mr ‘Hard Boiled’ himself, Chow Yun Fat, is in this CGI mess, hamming it up and sporting brightly coloured Hawaiian shirts. But, to be honest he was actually kinda funny and at least seemed to be having a good time. Likewise, Chatwin isn’t that bad and is kinda likeable in a goofy kind of way.  There is plenty of action (including a surprising amount of gunplay for a kid’s film!) though most of it is CGI heavy and a lot of doubles are used.  There are plenty of other comments out there about the horrible use of CGI in this flick, so I’ll just say there is a lot of it and if you ain’t a fan of it then you won’t like it here.

Not quite as awful as the world will lead you to believe but very far from good, ‘Dragonball: Evolution’ was still sort of enjoyable thanks to Yun Fat making anything he is in somewhat entertaining and the bubblegum action and visuals at least made it feel like a live action cartoon. But then, what do I know, I liked ‘Dragon Tiger Gate’.