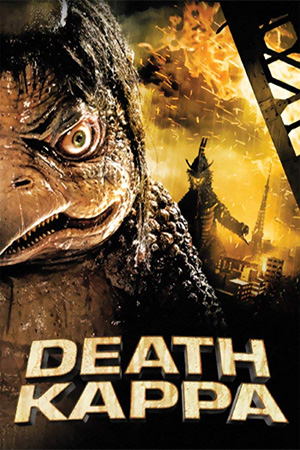 After failing to make it big with her singing career, Kanako decides to leave the city and heads off to live with her grandmother in the country. However, when she arrives she sees her grandmother get hit and killed by a group of reckless kids in a car. With her dying words, she instructs Kanako to take good care of the Kappa, a Japanese water goblin that they worship in the garden. Meanwhile, an evil organisation is also looking for a Kappa and when they hear that one is living in Kanako’s garden, they kidnap the two of them to help further their plans to create an army of deadly aquatic mutants. Things don’t quite go according to plan though, so they set off an atomic bomb which turns the Kappa and a remaining water mutant into giants who start a fight that could destroy the entire city!

In somebody’s head, ‘Death Kappa’ probably seemed like a great idea. Take a kooky mythical creature, turn him into a cute character beloved by all, and then wrap it all up with some classic Kaiju action. Sounds good, right? Well, sadly the finished film isn’t quite that exciting and is, at times, just downright boring. The limited plot we are given bounces around all over the place, serving up everything from evil fish people to a giant rampaging monster. As interesting as these ideas may sound, none of them are sufficiently fleshed out and the film just sloppily jumps from one random segment to another. Performances from the cast are also fairly weak, with a number of very wooden interactions that are made all the more painful by the “wacky” comedy routines that constantly miss the mark. By about the halfway point, even the creators seem to give up and everyone but the Kappa is killed off, staging the way for the final battle. All good and well perhaps, but unfortunately they seem to have forgotten that they still have plenty of time to fill so we are just left to suffer through endless, tedious shots of the evil monster causing havoc before we finally get any kind of confrontation.

Speaking of which, you’re probably all wondering how ‘Death Kappa’ fairs as a Kaiju flick. Well, no surprises here but it doesn’t really offer up all that much of merit. As I mentioned before, the monsters don’t really appear until the second half of the movie and one of them is just a giant Godzilla clone who repeats the same attacks over and over again. Now this is where it gets slightly more confusing as I’m not too sure whether these scenes are meant to be taken seriously, or just intended as an homage. I mean I know the budget was low, but they do things like leave the wires showing on toy helicopters or utilise bad blue screen effects, meaning you assume it all has to be tongue in cheek. However, there are also times when the effects show genuine attention to detail, which drags you out of your nostalgic perception and you start to wonder whether you should be enjoying this more than you are. In the long run though, this doesn’t really matter as the majority of these scenes still disappoint. The endless build up removes any sense of tension and the final conflict is brief and provides very little that we haven’t seen done better elsewhere.

‘Death Kappa’ is a real mess of a film that seems to be trying too hard to be considered cult rather than focusing on getting the basics right. If you’re a fan of Kaiju films then you may still get a few hits of nostalgia from the shoddy effects, but considering the rubbish you have to sit through to get there, it really isn’t worth the effort.