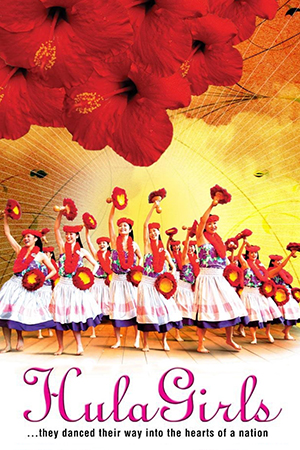 ‘Hula Girls’ comes to DVD having accrued quite a reputation at cinemas and film festivals around the world. A significant hit in it’s native territory, it was subsequently lauded at the Japanese Academy Awards and went on to represent it’s nation at the Oscars. Loosely based on a true story, ‘Hula Girls’ follows a great Japanese cinematic tradition of taking an assortment of disparate characters and throwing them into an activity that they seem ill-suited for.

1960’s Iwaki is a small community that is dependent on the revenue the local mine brings in. The majority of the inhabitants work there or have links to the industry so rumours of it closing plunge the townsfolk into chaos. The prospect of mass unemployment causes obvious tensions and news of a plan to bring new jobs to the area does little to assauge their fears. This plan to exploit the natural hot springs of the area to open a Hawaiian-style health resort and create work for a portion of the disaffected community is treated with disdain as is anyone showing the slightest interest in the concept. Sanae and Kumiko are among the first young female residents to brave the public antipathy for the opportunity to be a part of the town’s future. Along with an unusual mixture of students, the girls are given instruction in the art of Hula dancing by a despondent dance teacher who has left Tokyo to cash-in on the needs of Iwaki. Despite numerous obstacles placed in their way by relatives and other Iwaki townsfolk, the newly formed team become close friends and find that their efforts are slowly thawing out the atmosphere in Iwaki.

Those who have sampled the many other Japanese hit movies focusing on apparent misfits who find an unusual calling in life may wonder quite why ‘Hula Girls’ has been the massive blockbuster it has proven to be. Berwitching the viewing public and many critics alike, ‘Hula Girls’ is certainly not devoid of interest, but it will hardly stand the test of time in the same way as ‘Shall We Dance’ or my own favourite ‘Swing Girls’.

The story and its characters have been seen countless times before as have the melodramatic plot developments that pepper the narrative. Many other productions that have dipped their toes in similar waters have done so with greater aplomb by stirring the emotions of the audience to distract them from any contrivances. Yet ‘Hula Girls’ machinations are often uninspired, at times even slightly awkward. The stock character of a teacher with a hidden past, an ice queen who has a tender heart underneath her frosty surface is used once again and director Lee Sang-Il has little idea of how to inject new life into the cliche. As the film is only partially based on a true story, a bit of artistic licence may have enlivened a few of the more predictable sub-plots.

‘Hula Girls’ is indebted to its cast who manage to put the necessary charm into roles that can seem familiar without necessarily being sympathetic. Yu Aoi impresses with her feisty magnetism, that very Asian cinematic quality for leading ladies, and is given a good mixture of the comic and dramatic to sell her skills. Other performers are given much more meagre material to work with, Yasuko Matsuyuki imbuing her character with little genuine pathos despite the director’s attempts to nudge us in that direction.

Ultimately, ‘Hula Girls’ lacks its own identity. It takes a popular concept and rests on the fact that it apparently has a factual source material as its inspiration. To make such a pallid film in a country that has, in the past few years, produced similarly-themed ‘Shall We Dance?’ and ‘Swing Girls’ seems unwise – it’s simply not in the same league. Those who voted it ‘Best Film’ at the Japanese Awards and this particular reviewer will have to agree to disagree on ‘Hula Girls’.