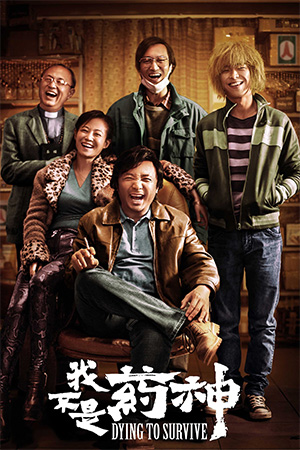 Black market peddler Cheng Yong makes a meagre living selling highly suspect medication from a small office in Shanghai. With his ex-wife threatening to take their son abroad to live and his father’s medical bills stacking up, Cheng is given an unusual proposition to make some quick money: to smuggle counterfeit medication from India into China. The request is made by a sickly man who suffers from chronic myeloid leukaemia and, along with scores of other sufferers around China, have been out-priced for treatment by the drug’s manufacturer. Reluctant at first, Cheng sees the business start slowly but gradually become a big hit and his trade with the Indian supplier gets larger each time. As the profits become greater, so does the risk and soon the rights holder of the medication asks the Chinese authorities to track down the mysterious Robin Hood figure.

I was a good ten minutes from the end of ‘Dying To Survive’ before I realised that the leading man was Xu Zheng, a massively successful actor/director who I always associate with the bald head he sported in mega-hit ‘Lost In Thailand’. That such a revelation hit me so late on shows two things. Firstly, that I had only read the most cursory of information about the film, namely it’s box-office success and very little regarding the cast and crew. Secondly, and most pertinently, I was so engrossed in this comic drama that I had no desire to let my mind wander to other matters. ‘Dying To Survive’, like all great films, makes you feel fully invested in its characters and their situation.

‘Dying To Survive’ skilfully blends an entertaining story with a social message that resonates far beyond the limited framework of cinema. The profiteering of major pharmaceutical companies has been touched on in past work, but rarely does it have the power it does in ‘Dying To Survive’. Clearly this is a very real issue in Chinese society at the moment and yet its message is not confined to just local shores. The fact that ordinary people are at the mercy of such corporate protectionism is the lasting theme of the film and director Wen Muye never wavers from this intent.

While ‘Dying To Survive’ offers an important message, it is, at its heart, an excellent comic drama. Xu Zheng is typically superb as the amoral lead who slowly, against every inclination within, finds himself caring about the cause that he is profiting from. The enjoyment also comes from seeing Xu and his unlikely allies come together as a surrogate family and their methods for keeping one step ahead of the authorities. ‘Dying To Survive’ is worthy of its acclaim – rarely does any film combine humour, drama and an important social message without missing a beat.