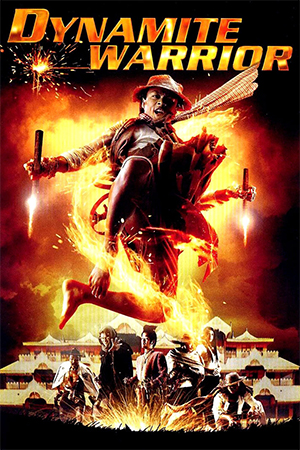 ‘Born to Fight’ star, Dan Chupong and its director, Panna Rittikari, reunite for the fantasy martial arts adventure, ‘Dynamite Warrior’ (aka ‘Tabunfire’). Bringing the bone breaking action from ‘Born to Fight’ and ‘Ong Bak’ (which the two also worked on), ‘Dynamite Warrior’ features many Muy Thai inspired fight scenes along with black magic, heroes flying on rockets and cattle rustling. While trying to deliver the top action that Thai films have now become renowned for, Chupong, Rittikari and the filmmakers try to mix things up a little by adding the fantasy element and almost succeed in their ambitions.

Chupong is the Robin Hood like figure, known as the Rocket Bandit. He roams the land protecting its people’s cattle which are being stolen and killed by a ruthless nobleman. Having imported tractors from the west, the nobleman wants the people of Thailand to purchase them and plough their lands with these new contraptions. The Rocket Bandit is also on the hunt for the mysterious killer of his parents, who he believes may just be the cattle rustler. However, the Rocket Bandit is tricked by the nobleman, who in cahoots with an evil warlock, turns him against an innocent man who they want dead. Realizing he has been tricked, the Rocket Bandit swears revenge and sets about breaking many bones and heads with his near indestructible knees.

A novel setting that is part Western, part Indiana Jones, helps propel ‘Dynamite Warrior’ out of its trapping of mediocrity. The story is nothing new and ticks all the clichés off as it lumbers towards it inevitable hard hitting finale. A simple story of a hero revenging his parents and overcoming betrayal is dragged out and made unnecessary complicated, with too many bad guys introduced and not enough oomph between the action scenes. Chupong does his best, stretching his acting abilities a bit more from ‘Born to Fight’ with a sweet love interest sub plot. The bad guys, including Rittikari as the evil warlock, become tiresome the more they ham up the screen and disappointingly, Rittikari never really cuts loose in his fights scenes when he is more than capable of doing so.

However, Rittikari does choreograph a series of hard hitting fight sequences that make good use of his star’s knees. The flick opens with a breathless display of combat that shows Rittikari and his Thai team are some of the best in the business. ‘Dynamite Warrior’ is packed with action and for the most part, it is neatly choreographed and a joy to watch. Showcasing the flexibility of Chupong, that he can take a hit and a fall as well as Tony Jaa; the fights may not equal the dynamism of ‘Ong Bak’ or ‘Born to Fight’ but still provide some fine displays of combat.

Outside of the fights the film has little else to offer. Production values are fine and as mentioned, the setting provides a unique backdrop. If Rittikari had directed as well as starred and action choreographed (as he did with ‘Born to Fight’) then the ‘Dynamite Warrior’ may have been a tighter, meaner fight flick. But director, Chalerm Wongpim (‘Heaven’s Seven’) spends too much time with half baked comedy and magic mumbo jumbo. Fun if frivolous, ‘Dynamite Warrior’ is not the best of its kind but worthwhile for the awesome combat.