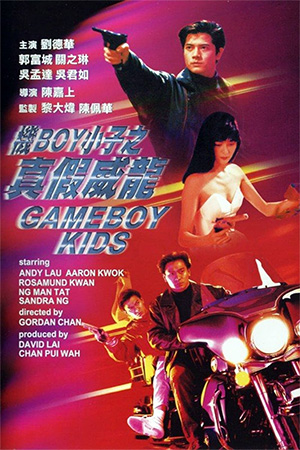 Watching films from yesteryear now inevitably means that you will be faced with the dreaded ‘This film portrays outdated representations…’ banner in the synopsis – we are, of course, so wonderfully enlightened today! And we shudder to think how modern audiences today would cope with seeing something that is peppered with such politically incorrect fare as ‘Gameboy Kids’ is; there are more potential triggers here than a reasonably-sized civil war.

When a powerful crime boss dies, he commands his followers to appoint noted killer Wang (Lau) as his replacement, giving them a photograph of him and his expected location. Unknown to the followers, Wang is in fact, how shall we say, vertically-challenged, and before they meet him, he is arrested at the meeting point (not for being vertically-challenged, I might add). Also here, though, is Wang’s doppelganger (also Lau) and he is quickly dragged away to serve as the boss of the gang. The only problem here is that this version of Wang is innocent and child-like and probably not the best fit for the triads. Yet his guileless persona begins to charm those around him, including the gorgeous assassin who has been sent to kill him (Rosamund Kwan who has rarely been as stunning as she is here).

‘Gameboy Kids’ is from that time in Hong Kong cinema when filmmakers were not greatly worried about offending anyone. It is, therefore, suitably lacking in nuance and will probably leave people slightly aghast. Yet for this reviewer, the only challenge is the infantile comedy that you kind of know you’ll get hit with in a film of this era. Andy Lau was transitioning from action star to comedy leading man at this point so there’s copious amounts of him (and the rest of the cast) mugging for the camera.

Something within me meant that I enjoyed ‘Gameboy Kids’ though. I can imagine watching it thirty years ago and wanting to throw a brick at the screen, but, imbued with a tidal wave of nostalgia today, it was a decent ninety-minute distraction. Seeing all of these great stars together – clearly enjoying themselves – and knowing that there will be a few solid action scenes peppered in the duration, makes it much more watchable than it has any right to be. And I’d rather watch this again than the numerous films masquerading as action comedies today…that said, I’d have one finger on the fast-forward button.