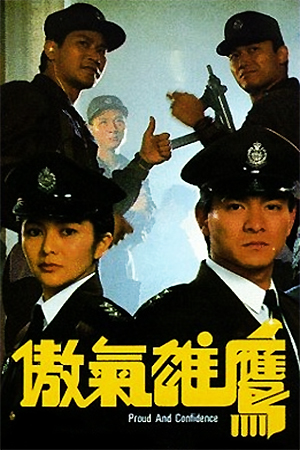 Ace marksmen Wah (Lau) manages to prevent a potential slaughter due to his exceptional sharp-shooting skills. Though his immediate superior is angry at the cavalier attitude Wah displayed during the operation, the powers-that-be decide to promote the young police officer to their special arms unit. Along with his cheeky best friend Wai, Wah joins the newly formed special unit that is trained to deal with expected terrorist attacks. Although he was the best in his former unit, Wah finds that there are a few rivals keen to undermine his glowing reputation. He also finds his arrogance attracting attention from the specially employed tactical researcher (Kwan) whose knowledge of the enemy is constantly undermined by the self-centred Wah. Such petty rivalries are put to one side when I.B.S (an international terrorist collective) plan to attack a controversial politician. The special police unit go into action against the threat, but there are tragic casualties.

‘Proud And Confident’ is an unusual amalgam of a few different ingredients. Firstly there’s the obvious allusion to ‘Top Gun’; despite the change of setting, the characters, storyline and dynamics all owe quite a lot to Tony Scott’s film. The cocky young hero is a carbon copy of Maverick and even his romance with the initially frosty instructor (a hopelessly miscast, but beautiful Rosamund Kwan) develops in an almost uncannily similar way. While this obviously brings into question just how much of ‘Proud And Confident’ is in any way original, there’s nonetheless enough to entertain within the film. Andy Lau pretty much copyrighted the swaggering hero at this time in his career, but it’s encouraging that the later scenes give him a chance to flex his acting muscles in some dramatic scenes. ‘Proud And Confident’ also introduces the ‘I.B.S’ – it was a partial education to me as I’d always thought this acronym stood for ‘Irritable Bowel Syndrome’, a fact that would have made for a particularly intriguing action film.

Alongside its ‘Top Gun’ fixation, ‘Proud And Confident’ also pre-figures the mid-90s obsession with SDU films. Made a good few years before Gordon Chan’s ‘Final Option’, this Andy Lau vehicle has all of the conventions that are expected of that sub-genre, even though it was made before the idea really caught on. Where ‘Proud And Confident’ does fall down is when it substitutes genuinely tension-filled action sequences for over-the-top bravado. These unintentionally amusing, Python-esque scenes of outrageous action really don’t help the serious tone of the closing thirty minutes.

While it has its faults (its blatant plagiarism that even extends to a stolen gag from ‘Police Academy’) this is nonetheless an enjoyable piece of 80s Hong Kong cinema. It’s undeniably rough around the edges, but in its favour it has a solid cast and some good interaction between the characters – certainly worth an evenings viewing.