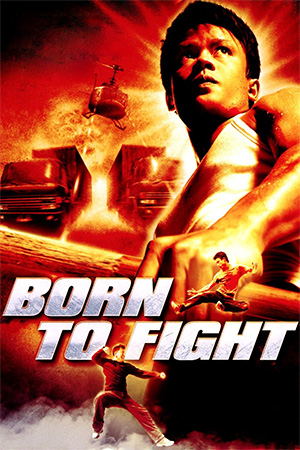 Experiencing decent action cinema from a new corner of the world is always exciting and with the emergence of ‘Ong Bak’, fans of Martial Arts films looked to Thailand in the hope that a new champion was on the horizon.  Unfortunately, ‘Ong Bak’ remained the only real example of Thailand’s action filmmaking to be recognised globally, that is until the arrival of ‘Born To Fight’.  Handled entirely by action choreographer Panna Rittikrai, ‘Born To Fight’ promises all the same thrills seen in ‘Ong Bak’ but the question is, is it on the same high level or  have we all been jumping to conclusions?

During the biggest bust of his career, police officer Deuw (Changprung) manages to capture the most notorious crime lord in Thailand but at the expense of the death of his partner.  This has serious effects on Deuw and he decides to take time away from his job by joining his sister on a sports tour of local villages.  His planned rest goes hellishly wrong though when the group find themselves in a village targeted by terrorists, demanding the release of the crime lord.  Luckily the skills of the group come in handy as the villagers rise up and begin to take on the terrorists at that own game, with Deuw leading the attack from the frontline.

In the simplest terms, ‘Born To Fight’ is absolutely outstanding when it comes to action.  I don’t often make bold statements like that as over the years I have become very critical of all aspects of action cinema but ‘Born To Fight’ truly had me captivated throughout.  Much like ‘Ong Bak’ (not necessarily an accurate comparison but the only real one we have), the film continues with the ultra-realistic brand of action in which the heroes do all of their own stuntwork and every blow struck is eye-wincingly painful.  For his directorial debut though, Rittikrai takes the concept one step further by just pummelling the viewer with pretty much an hour or so of solid action, all of which is of the highest calibre.  Sure, some of it is clearly very staged and often laughable in concept but that doesn’t stop it from containing some of the most refreshing and entertaining choreography in quite sometime.  The dexterity of the actors and the jaw-droppingly dangerous stuntwork is a marvel to behold and watching the painful outtakes in the finale brings back memories of the first time you saw Jackie Chan suffering for his art.  In short, this movie is extreme action entertainment and something that any fight fan must have in their collection.

‘Born To Fight’ does however suffer with the most common action movie flaw in the book and that is a poor and underdeveloped story, a criticism also levelled at ‘Ong Bak’.  Both films were written by Rittikrai so it doesn’t really come as any great surprise but we all know that it is possible to create a decent story to accompany an action movie and that clearly isn’t the case here.  Most of the plot points are ludicrous and there is very little establishment of the main characters as the movie really only contains around 20 minutes of plot before the action kicks in and that’s it for the remainder of the film.  This approach does of course create a fun film to watch with your friends as you can easily create your own amusing commentary and just sit back and be astonished by the stunts but it does allow for understandable criticism.  However, at least you know what to expect from it and which level you should approach the film on.

It’s obvious that ‘Born To Fight’ is an extremely light film that will most likely be panned by mainstream critics but lapped up by the action junkies amongst us.  It’s basically just ninety minutes of acrobatic fight sequences, nail biting stuntwork and laughable plot devices, so enjoy!