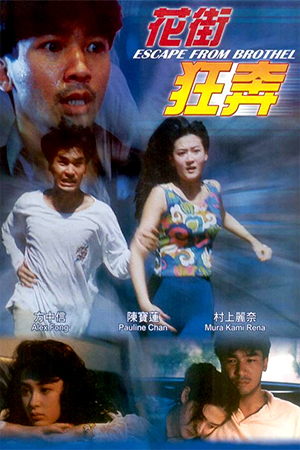 This extremely downbeat CAT III flick offers the requisite amount of nudity, sleaze and hard hitting kung fu action but is just a little too cheap, grubby and unnecessarily downbeat to be overall entertaining. While not as well known as some of the more infamous CAT III entries of the 80s and 90s (‘Ebola Syndrome’, ‘Untold Story’) ‘Escape from Brothel’ still has a nasty sting in its tail (certainly in the un-cut version). Sam (Fong) is lured from mainland China to Hong Kong by a couple of so called buddies to take part in a jewellery robbery that, non-surprisingly, goes spectacularly wrong. With his mates’ dead, Sam seeks out his girlfriend who has been living and working in Hong Kong. Believing she is a factory worker, Sam’s girlfriend Ann (Chan) is actually a prostitute. Sam then finds his world shattered as he and Ann are forced to go on the run in a world of sex, depravity and violence with little hope of escape.

Veering from sexploitation, to kung fu action to even a bit of comedy hi-jinks, ‘Escape from Brothel’ may sound like it would a wild trashy romp but is in fact a grimy and often depressive trip through Hong Kong sleaze. And if that is your thing, then you will probably enjoy it a whole lot more. There are no likeable characters (even our hero Sam is too much of a wet blanket to care about as he continually lets awful things happen to his girlfriend while he mopes away). There is plenty of sex and nudity (often full frontal) on offer but as it’s mostly grubby and un-sexy you start to wonder what the point is (though a liaison on a boat has its titillating moments!). This all sits side-by-side with the occasional bout of ultra violence meaning the flick never finds a good balance between sexy fun and action thrills. This review is of the heavily cut UK version that omits a graphic torture scene, the full baseball bat-inserted-somewhere-it-shouldn’t-be scene and the legendary naked kung fu fight. If you are fan of Hong Kong CAT III sleaze then you will probably want to hunt down the uncut version.

There is some nifty action here and there including the somewhat spectacular showdown that features many a painful looking stunt. There also a few ill advised “comedy” moments involving a lame gag with everyone needing to use the same toilet but they don’t sit right with the graphic nudity and violence. If you are a fan of CAT III flicks you will get more out of this but this isn’t produced well enough to be considered a slick piece of extreme cinema and the ending is so pointlessly down beat, you’ll probably just want to watch Disney films for days afterwards as a pick me up.