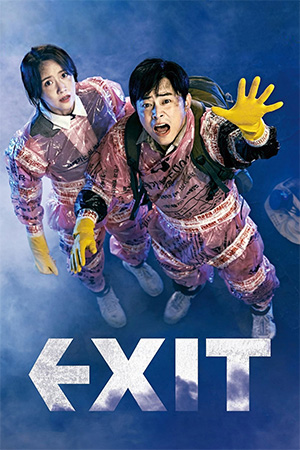 After showing great promise in his younger years as a rock climber, Yong-nam has now found his life drifting into obscurity and is now resigned to living with his parents. Dealing with the constant reminder that he is a disappointment to his family, Yong-nam sleepwalks through his days, something even more evident when he and his extended family come together to celebrate his mother’s 70th birthday. While the party takes place in a plush venue high in the Seoul sky, a disgruntled scientist decides to end his life and take thousands of others with him when he releases a deadly toxin. The wave of gas begins to creep over Seoul and soon Yong-nam’s family and guests are caught in the middle of the drama. With the eyes of a former girlfriend who works at the venue also on him, it’s time for Yong-nam to find his inner hero and save his family.

There is something in ‘Exit’ that immediately reminded me of that classic ‘The Host’. It’s the remarkable blending of thrills, drama, and black humour that recalls the Bong Joon-ho hit and it says something about ‘Exit’ that it at no point comes off as second best to its forerunner. It starts slowly, not having that instant hook that drags you kicking and screaming into the events. That might put some people off, but it’s the classic disaster movie conceit and works very well in ‘Exit’.

One thing that separates ‘Exit’ from the traditional disaster film it might be casually associated with is that this isn’t an ensemble movie; this is about the two leads, Jo Jung-Suk and Im Yoon-Ah (who is permanently singing ‘Genie’ in the furthest recesses of my subconscious). It works perfectly with these protagonists and Lee Sang-Geun throws every cinematic trick and cliché out of the bag to put these two through the wringer. Nevertheless, it’s genuinely exciting, while occasionally veering into rom-com territory without missing a beat.

‘Exit’ is funny and thrilling, charming and tense. While its initial pacing requires patience from the viewer, the overall effect is two hours of slick and well-executed fare that shows Korean cinema – that industry that many people seem to be just discovering – can crank out shiny blockbusters that do that one thing forgotten by so many of their Hollywood contemporaries: Entertain, pure and simple.