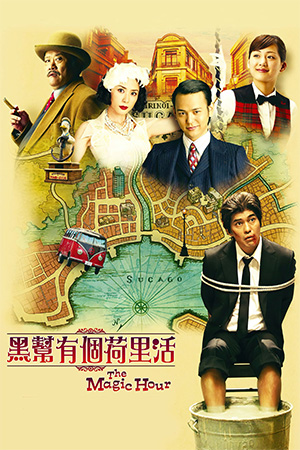 Koki Mitani films are like the screwball comedies of Hollywood of the 30s. Utilising a strong ensemble (and drawing on his experience in the theatre), Mitani has had numerous zesty hits like ‘Welcome Back, Mr McDonald’ and ‘The Uchouten Hotel’ that have shown the film-maker’s unashamed reverence for the Golden Era of Hollywood while bringing his own Japanese sensibility to it. 2008’s ‘The Magic Hour’ was a significant hit in its native country and had garnered an Asian reputation significant enough for it to be remade in China as ‘Too Cool to Kill’ (review coming shortly).

When noted gangster Teshio’s underling is caught in flagrante delicto with his boss’s beloved moll (Fukatsu), it’s concrete foot spa time for the pair. Yet the underling, Noboru, is given a way out; find the mysterious assassin Della Togashi and introduce him to Teshio. Noboru agrees, pretending he has met Della personally, and is freed along with his lover. But with a few days to find Della – a man few have ever seen – and all escape routes blocked, Noboru is left counting down the days until he is killed by Teshio. All this changes when he thinks of an ingenious scheme, involving a washed-up actor playing the part of Della and getting the lovers off the hook. The said actor, Murata (Sato), is tricked by Noboru into thinking that this is the role of a lifetime and every move is being secretly filmed for the cinema, meaning his actions become increasingly foolhardy. Soon Murata has charmed Teshio, but there are cracks appearing in the narrative and the actor begins to realise that the film he is appearing in is a bit too real.

Koki Mitani has never hidden his admiration for the great screwball comedies of the past (he also counts ‘Columbo’ as an influence, which in my mind means he can do no wrong!) and the quick-paced, frenzied elements are all present in ‘The Magic Hour’. It makes for a breathlessly enjoyable comedy, packed with homages to his inspirations along with a nod to Japanese cinema (legendary director Kon Ichikawa even gets a cameo role). The director also belies his love of the stage as the film uses a few grand sets and feels as if it could have been produced as a play. This could be a problem; there have been plenty of stage productions that have struggled to shake off the restrictions of their medium when transferred to the big screen. For most of the film, ‘The Magic Hour’ dances past this potential hazard with all the verve and spirit that shows his skill as a filmmaker.

The highlight of ‘The Magic Hour’ is Koichi Sato as ham actor and self-indulgent artiste Murata – he really is the glue that keeps the whole story together. Playing a parody of some of his other more serious roles, Sato, bouffant hair bouncing like a L’Oreal commercial, is hilarious as the man totally unaware of his surroundings. Even when he does twig what is happening, his dry humour makes for a winning end to the film. The blemish against ‘The Magic Hour’ is that when Sato isn’t on the screen, the energy drops somewhat; the other characters simply aren’t as likeable as the main protagonist. Thankfully Sato is in the vast majority of the film so the moments that the momentum seems to be running aground are relatively few.

‘The Magic Hour’ is a fun comedy, though not the classic it promises to be. It still has an enormous amount to recommend it though and is a good starting point for those looking into Japanese comedy.