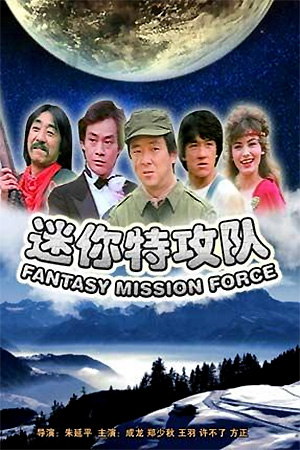 This film is well-documented as being Jackie Chan’s strangest film and a production that still baffles veteran Hong Kong viewers to this day. As a favour to Wang Yu, Chan starred in this bizarre hybrid of action, fantasy and very broad comedy with the result being a definite black mark in his career, but a strangely entertaining one.

Some films are so bad they’re good, but with Taiwanese director Chu Yen-Ping in control this is better described as so weird it’s watchable as however confusing and downright silly the film gets, it does retain an unusual curiosity value. Any attempt to explain the plot of the film with the written word is near-impossible, but for those interested in the film, here’s the basic premise: The Japanese have kidnapped a number of high-ranking officials during World War II and has kept them captive in Luxembourg (?!). The allies assemble a force to locate these generals and save them, and as it transpires, a cache of gold. These unusual assortment of characters head out in their Jeep to take on the might of the Japanese army and on the way take on wizards, Amazonian warriors and traitors.  These few lines do not do the sheer quota of surrealism justice as the audience is also treated to incredible period detail (where World War II apparently featured armour wearing Japanese warriors driving cars straight out of Starsky and Hutch) and a jolting sing-a-long song that appears near the beginning of the film. Jackie Chan appears for a couple of routine fight scenes, but he’s on screen long enough to be thoroughly embarrassed by the whole production. Alongside him is the very surprising sight of a young Brigitte Lin as one of the main stars, this film coming briefly before she would become a huge star in Hong Kong (with Jackie Chan’s ‘Police Story’ being one reason for this in 1985). ‘Fantasy Mission Force’ is a ridiculous film, but if you think you’ve seen every curio that Eastern cinema has to offer, this is worth watching.