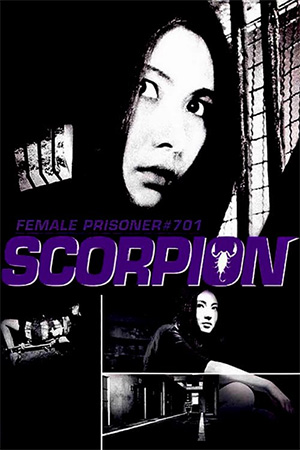 Sent undercover as a nightclub hostess amidst the Kazui Yakuza Organisation by her boyfriend, narcotics officer Sugimi (Isao Natsuyagi), Nami Matsushima (Meiko Kaji) is exposed as an informant, gang-raped and left abandoned and betrayed by her cruel partner. Unbeknownst to Nami, she had been used by the corrupt Sugimi to bring down Kazui’s drug business for a rival clan. Seething with hatred, her attempt on his life sees her incarcerated with hard labour the reward for her cold-hearted betrayal. Once inside, as she refused to name her accomplices in court, she is subjected to violent abuse, beatings, sexual assault and stretches in solitary confinement with the futile goal of making her talk.

But Nami’s ice-cold exterior, and deadly sting against those who cross her, soon garners her the nickname of Matsu the Scorpion. Arsonist Katagiri (Rie Yokoyama) and fellow inmate Masaki (Yoko Mihara) challenge Matsu on release from solitary, unexpectedly resulting in Masaki’s death and the blinding of the prison’s Warden (Fumio Watanabe). Befriending the mute Yuki (Yayoi Watanabe), as well as attracting the loyalty of an enigmatic nameless prisoner (Hiroko Ougi), Matsu soon attracts the Devil’s Punishment (digging her own grave) through her silent defiance. Once that defiance bleeds onto the other prisoners’ burglar Otsuka (Akemi Negishi) seizes the opportunity to stage a riot which will inevitably lead to hostage siege as well as Matsu’s showdown with her aggressors, both in and outside the prison walls.

On the surface, from the deliberately brief synopsis above, Shunya Ito’s directorial debut feature ‘Female Convict #701: Scorpion’ (1972) sounds much akin to any other entry in the exploitative “women-in-prison” sub-genre, but writing it off as such would be the ultimate disservice (read: insult) to a ground-breaking, and trendsetting, work spawned of Japan’s Pink eiga. Japanese exploitation, as well as sexploitation, arguably made a marked impact on surrounding Asian territories via its export, with studios such as Hong Kong’s Shaw Brothers appropriating (and somewhat diluting) the style of the sub-genre for home-grown Chinese audiences under (then) censorious British rule at the onset of the early seventies. Even cult filmmaker, and super movie-geek, Quentin Tarantino acknowledged ‘Scorpion’ as a direct influence on his ‘Kill Bill I & II’ (2003 – 2004) series, going so far as to utilise the haunting theme song, “Umari Bushi” vocalised by lead actress Meiko Kaji, in his films to further cement the connection. Thus, then thirty, now nearly forty years on, the masterful pairing of Shunya Ito and the iconic Meiko Kaji with ‘Female Convict #701’ remains as influential as ever.

Derived from a comic (or manga, for the purists) by Toru Shinohara, which was first published in young male-oriented periodical Big Comic in 1970, ‘Female Convict #701: Scorpion’ is, as far as exploitation cinema goes, an amazing piece of work and worlds away from the dingy, grubby low budget programme-fillers that the women-in-prison genre would evolve into during later years. Foremost of ‘Scorpion’s assets is the incredible Meiko Kaji, as the titular character and central protagonist Nami Matsushima, or Matsu the Scorpion. Originally signed with Nikkatsu, Kaji would make a minor name herself there with ‘The Blind Woman’s Curse’ (1970) and the juvenile delinquent thriller ‘Alleycat Rock’ series (later known as ‘Stray Cat Rock’ internationally) before jumping ship in 1971, at the advent of Nikkatsu’s shift into pink eiga, to major studio Toei. A fortuitous meeting with first-time director Shunya Ito led to her casting in the lead role in Toei’s competitive pink film ‘Female Convict #701’, the first of an intended series of ten features, and one that would go on to bring her fame throughout Japan as well as a (later) cult following with overseas audiences.

And Kaji is irrefutably a powerhouse in her Toei debut, all seething hatred, wild eyes and cast-iron determination to succeed in her revenge plot (indeed, it was her decision, in consultation with Ito, to eliminate much of Matsu’s dialogue to further generate the enigmatic ambience of the character as well as create a performance largely through expression alone). Whether it be hog-tied and face-down in the squalid filth of her solitary cell, or effortlessly inciting brutal shower-room brawls without uttering so much as a whisper (or word), or silently seducing undercover prison operative Kitoh (Yumiko Katayama) in their shared cell, Kaji never engenders anything less than painting Matsu as a raw, primal, cold-blooded force of nature who will bend to no-one to achieve her vengeance. Kaji’s performance is one of such firebrand intensity that it goes on, as the narrative unfolds, to eventually consume the film to become the living, breathing vengeful heart of the piece. Accompanying Kaji are Rie Yokoyama (‘Ecstasy of the Angels’, 1972), as her nemesis Katagiri whose arsonist profile is put to fine use come the finale, Akemi Negishi, a protégé of Akira Kurosawa, as riot-hungry inmate Otsuka whose opportunism proves the catalyst to the final act, and Yoko Mihara (‘Girl Boss Guerrilla’, 1972) as Masaki, who is afforded one of the film’s brief surrealistic fantasy sequences stalking Matsu with shard of glass in hand through the women’s shower-room. Of course, no notice is complete without Yayoi Watanabe (who would go on to appear in sequels ‘Beast Stable’ and ‘Grudge Song’) as the mute Yuki, the film’s virtual sole sympathetic character outside of Matsu, and singer Hiroko Ougi as Nami’s nameless, enigmatic benefactor who becomes her window of eventual escape.

Complimenting Ito’s direction and Kaji’s central performance are collective elements that gel together seamlessly making ‘Female Convict #701: Scorpion’ the extraordinary sum of its mesmerising parts. As with many Asian filmmaking regions, such as Hong Kong, at the time of its production Ito’s film was the by-product of audiences migrating in droves to the comfort of their living rooms thanks to the widespread influence of television, and studios such as Toei were willing to give young talent unfettered freedom of expression to create films that would draw those audiences back to the cinemas. Ito’s film is, at once, exploitation film and experimental work per the idiom of many early seventies productions. Cinematographer Hanjiro Nakazawa, who had worked with the late Kinji Fukasaku on ‘Gamblers in Okinawa’ (1971) and ‘Street Mobster’ (1972), shows extraordinary experimentation with the use of skewed angles, upside-down shots and various free-moving camera tricks throughout, lending the film an urgent, frenzied visual palette that transgresses Ito’s work into an amazing territory beyond simple exploitation fare. Likewise, Art Director Tadayuki Kuwana and Set Designer Masao Ishii create some unforgettable images and visual design for their director, occasionally invoking the spirit of Masaki Kobayashi’s ‘Kwaidan’ (1964) with garish painted backdrops and skylines that immediately remind the viewer of the film’s comic-book origins within the exaggerated reality of their design.

Retrospectively, it’s not hard to see (even forty years on) why ‘Female Convict #701: Scorpion’ was such a massive hit for Ito as well as cult-defining role for Kaji, especially when one comes to the film on the back of Joe Ma’s inexcusably awful Hong Kong reimagining of the series, ‘Sasori’ (2008). Obviously, it is not a film for everyone, as its exploitative elements are at the fore and it is genuinely extremely adult-oriented in tone with its frank, as well as plentiful, onscreen nudity (curtailed somewhat by Japanese censorship of the era which prohibited full-frontal nudity), sometimes jarring sexual violence (inclusive of female and male rape) and bountiful physical violence that stems from brutal beatings through graphic slow-motion bloodletting. However, fans of exploitation cinema as well as students of international cinema and its trends will have solid reward from ‘Female Convict #701: Scorpion’ and the powerful ferocity of the onscreen tale of love, betrayal and revenge it weaves. The astute will even warm to the intense political undertones of the piece, as it opens on the Japanese flag and even goes so far as to show blood welling up in a sun-like orb against a white sheet at the moment Matsu loses her virginity to Sugimi.

There is a lot more to ‘Female Convict #701: Scorpion’ than initially meets the eye that would dictate, by mainstream standards, that it should be dismissed as nothing more than violence-laden sexploitation. From its success it went on to generate those nine additional sequels, with Ito vacating the director’s chair after ‘Female Prisoner Scorpion: Beast Stable’ (1973) and Kaji stepping down (citing “creative differences” with replacement director Yasuharu Hasebe) after ‘Female Convict Scorpion: Grudge Song’ (1973), as two successive theatrical features and four video entries in the nineties. From its opening haunting ballad, serving as both backdrops to the title credits and a nude inspection of the inmates by the male prison-guards, to its final freeze frame on the eponymous anti-heroine, ‘Scorpion’ is a literal masterpiece of exploitation cinema; and one that has not only stood the test of time but bears up to repeat viewings effortlessly. It is a film that holds its mantle as one of the classics of its genre and comes with this reviewer’s highest recommendation, albeit one with a cautionary word towards the content that may prove either disturbing, upsetting or offensive for viewers of a more sensitive disposition.