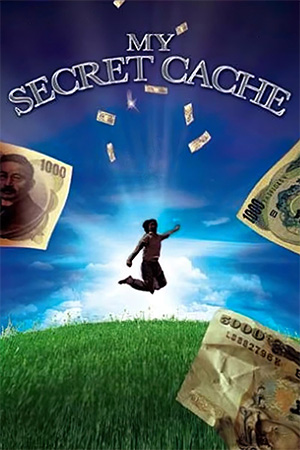 As a child, Sakiko discovers that only one thing brings her any measure of happiness: money. She loses friends who want to play while she is oggling her savings book and boyfriends who are asked to pay for their dates with her. It seems almost destined that she should grow up to be a bank clerk, counting copious amounts of other people’s money for a living. Observing others’ riches soon loses its shine though and only when she is taken hostage by bank-robbers does her life have the thrill she longs for. Bundled into their boot, Sakiko emerges only when the car has crashed down a hill and victim and loot are subsequently thrown into the raging waters below. The current takes Sakiko and the suitcase full of yen to a remote cave in the countryside where the money remains while she falls unconscious and is swept further upstream.

Sakiko is found, rushed to hospital and becomes a minor celebrity as she recuperates over the next few months. The indolent patient is only shaken from her ongoing stupor when she learns that the criminals who abducted her and the money they stolen is all believed to have perished in the explosion that followed their car crash. Sakiko knows the former may be true, but the latter is certainly not and if she could find the cave and somehow traverse the obstacles therein, she could have millions of yen to satiate her hunger for wealth. What follows is a Homeric adventure where the single-minded obsessive plans a way to get the case while obtaining a geology degree, becoming a champion swimmer and Japan’s most successful climber on the way.

Shinobu Yaguchi excels in taking ordinary, often hebetudinous losers, and turning them into unlikely, empathetic heroes. ‘The Waterboys’ was replete with such characters while the peerless ‘Swing Girls’ was perhaps the very apex of this theme. Yaguchi’s earlier ‘My Secret Cache’ is a film driven by its nutty protagonist and her blinkered view of life, though again this potentially repugnant character becomes a heroine we quickly learn to cheer for. In so doing, the very capable man behind the lens produced another delightful comedy that, while rougher around the edges than his later hits, still retains great charm throughout.

‘My Secret Cache’ works on a number of different levels. As a satire – albeit not a particularly subtle one – the film pointedly mocks the materialism and unreasoning love of financial gain that has become intrinsic in Japanes (and Western) culture. Sakiko takes this desire for wealth to new heights, showing how that this compulsion could be focused in a slightly different way, yet with the same ultimate goal. The broad satirical swipes at Yaguchi’s homeland mix together with an increasing level of surrealism, all executed with that divine Japanese dead-pan humour at the kernal.

Naomi Nishida is undoubtedly the driving force of the narrative and goes through all manner of catastrophes with that vacant expression firmly planted on her face. Her motive is difficult to sympathise with while her selfishness is not a facet of her character that is appealing, yet Nishida injects interest in her role. She succeeds in making Sakiko naive rather than ruthless and has the viewer in the palm of her hand by the end. Director Yaguchi also ensures that his lead changes by the time she finally reaches the money, her life having been so full of incident and purpose that it appears as if her ultimate goal may have adjusted. The story is packed with oddballs and eccentrics; Odysseus had Sirens and Lotus-Eaters while Sakiko has to contend with slipper-wearing, afro-adorned road-ragers, a psychotic love rival and a geology professor who tastes the specimens he discovers. It all makes for a delightful adventure that has belly laughs weaved together with the odd moment of social commentary. Shinobu Yaguchi is a first-class director of comedies and this is an earlier example of his craft.