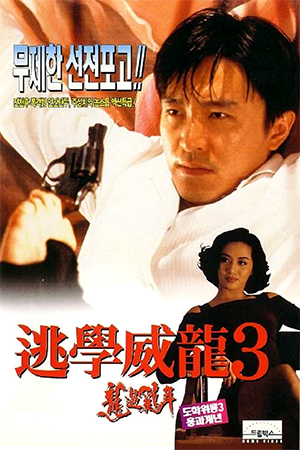 After a man is murdered with an ice pick during sexual intercourse, veteran officer Sing (Chow) is called in to try and solve the case.  By an uncanny coincidence, the victim looks identical to Sing so the decision is made to send him in as an undercover. Sing now finds himself saddled with a beautiful wife (Anita Mui), an incompetent sidekick (Natalis Chan) and one very unhappy girlfriend (Cheung Man), all of whom will do everything they can to prevent him from doing his job!

This third and final entry into ‘Fight Back To School’ series is by far the weakest. Aside from Chow’s character being a policeman, there is no real connection with its predecessors and instead we are (mis)treated to a fairly ridiculous ‘Basic Instinct’ spoof. Wong Jing’s influence is particularly strong, and we are forced to suffer through a number of sleazy and childish bouts of comedy as well as a handful of pointless gambling scenes. It’s a shame really as there’s a decent cast involved, but the confusing and pathetic plot is just a total waste of their talents.

‘Fight Back To School 3’ is a sad dip in quality for the series, with Jing reducing the all-important comedy routines to the lowest common denominator. Even a fairly strong cast can’t save this one and I’d really only recommend it to Stephen Chow completists.