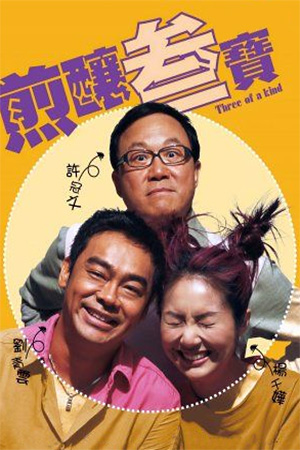 While ‘New Police Story’ and ‘Kung Fu Hustle’ remain the films everyone is especially eager to see in 2004, I anticipated Joe Ma’s ‘Three Of A Kind’ equally as much. The obvious reason for such excitement was that, after years away from the big screen, Hong Kong legend Michael Hui returned to a lead role in a new blockbuster. After a wonderful cameo in ‘Fantasia’, Hui broke his screen hiatus and now local audiences can savour the opportunity of seeing the comic master back. Alongside him are Miriam Yeung – a comic actress whose screen persona has always entertained me – and Lau Ching Wan, still one of the great actors in Hong Kong. ‘Three Of A Kind’ undoubtedly had potential to be a minor classic, which is why the finished production is even more heart-breaking.

Dragon Lone (Hui) is a wuxia writer who lives a comfortable life living off the significant royalties of his pulp novels. Doting on his daughter Sophia (Yeung), Lone lives a cautious life and refuses to treat her as a woman, preferring to remember her as his little girl. When Sophia’s employer, hedonistic charmer Frankie (Lau Ching Wan), arrives on the scene, Lone is especially eager to protect his daughter. Forcing Frankie to make a vow never to court Sophia, Lone continues to meddle with his daughter’s private life. However, the more time that the shallow Frankie spends with Sophia, the more he realises that he wants to settle down and live his life with the one woman who has always been close to him. Unfortunately, Lone is expectedly indignant at Frankie’s change of heart and determines to stop the romance blossoming.

On paper, ‘Three Of A Kind’ has the kind of synopsis that promises to be like a variation on ‘Meet The Parents’; the thought of a Hong Kong take on this amusing hit would certainly have been worth watching. Sadly, ‘Three Of A Kind’ is a comedy that lacks any kind of direction or impetus, choosing to meander on to the end of its overlong duration.  While its clearly got the look of a blockbuster with an impressive cast and production values, the resulting effort is sorely lacking in a humorous cutting edge. Starting with a melodramatic introduction, ‘Three Of A Kind’ struggles to ascertain what tone should be employed for the rest of its running time. Switching between lightweight comedy and moments of awkward romantic sentiment, ‘Three Of A Kind’ is wholly unsuccessful in nearly every area.

One obvious constraint on the film is director Joe Ma, who fails to harness any of Michael Hui’s energy or inspiration. Joe Ma is a director who may not be hitting the artistic heights of Johnnie To or Derek Yee, but has often managed to turn out entertaining productions to appreciative audiences. At his best, Ma manages to take pedestrian concepts – both comic and dramatic – and turn them into hugely watchable features (see ‘Love Undercover’ and ‘Funeral March’). However, in ‘Three Of A Kind’, Ma has churned out a film that makes no effective use of Michael Hui had his experience. Scenes featuring Hui seem to be restraining his persona; every time it looks like the dead-pan humour or Hui trademarks are ready to emerge, the excitement is cruelly stamped out. Hui clearly has very little involvement in the film behind the scenes and such an indifference shows.

‘Three Of A Kind’ is harmless enough as a stand-alone feature despite its serious flaws. It isn’t necessarily painful to watch, but any film that has such a lack of creativity is hardly going to inspire. Not only is Hui poorly used, but his supporting cast is also wasted. While Lau Ching Wan has a degree of fun in his philandering role, Miriam Yeung shows little or none of the charm that she’s bought to films like ‘Dry Wood, Fierce Fire’ etc. Without the spark within some of the most important performers of the production, the whole effort seems lazy and directionless. Even the dramatic denouement is lacking in any real wit or imagination. To say this about a Michael Hui film is truly a sad thing.

Those not familiar with films like ‘The Private Eyes’ or ‘Security Unlimited’ may get some enjoyment from ‘Three Of A Kind’. It’s mostly inoffensive (despite one very unpleasant joke featuring Michael considering what to do to Lau Ching Wan’s character) and has a few pleasing allusions to wuxia novels. Nevertheless, anyone who’s seen any of the Hui brothers films will be bitterly disappointed and will wonder why Hui appears in it as his role is so bland that any actor could’ve played it. If nothing else, it can be hoped that ‘Three Of A Kind’ will see Michael Hui return to the big screen on a permanent basis and produce something that will please his many fans. As it stands though, this is a shallow romantic comedy that has very little of either quality therein – and even more pertinently, it manages the unenviable feat of wasting Michael Hui.