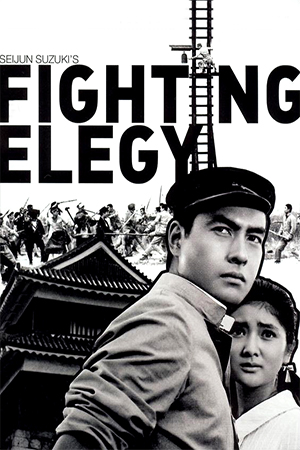 Okayama 1935, young, impressionable and permanently randy Kiroku (Takahashi) attends high school, boards with a local Catholic family and lusts after their daughter, Michiko (Asano). Forever in a battle with his blossoming urges Kiroku attempts to keep his impure thoughts at bay by getting into fights. He’s decided the way to combat lust is to use aggression and fight whoever he can get his hands on. He learns fighting from local man Turtle (Kawazu) and also from fellow classmate Takuan who he joins a gang with and soon finds himself up to his neck in fisticuffs. While his love for Michiko grows so does his need for aggression venting eventually leading to his expulsion from school. Thus, his father decides to send him to the country away from violent and lustful distractions. However, his separation from Michiko only fuels his rage and he is soon heading down a path where the military, recruiting young soldiers, can use his knack for fighting/violence for their own gain.

One of ‘Branded to Kill’ and ‘Tokyo Drifter’ director Seijun Suzuki’s most personal films, ‘Fighting Elegy’ tiptoes a tightrope between broad farce and serious subject matter. Looking at the susceptible young men of the era and the pressures they faced to appear heroic and noble, Suzuki’s film looks at how the time and its pressures affect one young man as he starts out trying to do the right thing but soon finds societal and impending manhood pressures affecting his decisions. ‘Fighting Elegy’ is a brave film for the time taking in everything from social taboo’s (lust, masturbation), to violence (and how it was often the only way to vent male frustration, both sexual and otherwise), and to how young and vulnerable males where pressured into the military and believing in its cause. Suzuki covers a lot ground but keeps it tight and focused thanks to a clipped running time (86m minutes), some sumptuous black and white photography and a tone that buoys (often within the same scene!) between loud mouth farce, violent fight film and a serious look at a troubled and confusing time in Japan’s history.

For the most part this all works but it does occasionally buckle under its own varying tone and brashly presented ambitions. While all the cast are great, especially leading man Hideki Takahashi, the constant shouting and aggressive nature of everyone (bar Michiko) does grate after a time with some of the more serious points perhaps lost in all the yelling, brawling and trying-to-keep-ones-libido-in-check. However, this is a film that still feels ahead of its time, not just in its subject matter, but also in its realistic and unflinching portrayal of violence. The often-large scale and sustained fights and battle are impressively staged and in certain cases look like they were just shot yesterday. Mixing thrilling momentum with serious social subject matter, ‘Fighting Elegy’ is uniquely Suzuki. It may feel a little dated in some respects and that one is watching a heightened version of a serious time in a country’s history but ‘Fighting Elegy’ is still exhilarating cinema.