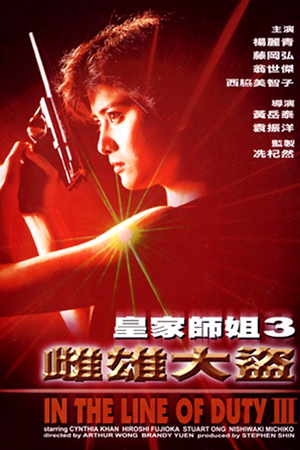 Made in the same year, and with much of the same team (except Yuen Woo-Ping) as ‘Tiger Cage’, this film is a slight disappointment.

Cynthia Khan made her ‘ITLOD’ debut here and seems to be a little ill at ease with trying to carry the film single handedly. This shows not only in her acting, but also her early fight scenes, which she tackles with far more accomplishment and vigour in the superior sequel. However, this flick still has a lot to offer. Firstly, fan favourite Michiko Nishiwaki tackles one of her meatier roles and comes across a lot better than in other films such as ‘Beyond the Law’ or ‘Outlaw Brothers’, while many fans will also want to take this opportunity to see her naked in a short, yet fairly graphic sex scene.

The plot is textbook stuff focussing mainly on the 80’s favourite revenge storyline, which only acts to give the cast an excuse to kill and chase each other. Many of the fight sequences are powerful and realistic, and there is a good balance between cinematic choreography and outright simple bloodshed. While not as action packed, or as choreographically slick as ‘ITLOD 4’ or ‘Tiger Cage’, it features stronger acting performances from most of the cast (except Cynthia!) and should fit well between the other films in the series and is a must have for both 80’s action lovers and fans of the femme fatales.