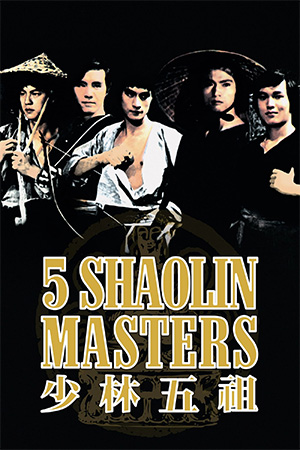 Chang Cheh’s favourite subject – the destruction of the Shaolin temple and the events that followed – are tackled in this all-star spectacle. As the ‘Iron Triangle’ was slowly coming to its end, Chang Cheh began to introduce one of his new discoveries to the blend, Fu Sheng, and packs the supporting cast with a rogues’ gallery of familiar villains.

The film opens a few moments after the Manchu army has destroyed Shaolin and killed most of its inhabitants. Escaping from the slaughter are five Shaolin heroes:  Tsai Te-Chung (Ti Lung), Ma Chao-Hsing (Fu Sheng), Fang Ta-Hung (Meng Fei), Li Shih-Kai (Chi Kuan-Chun) and Hu Te-Ti (David Chiang). With the rebellion movement in tatters, the five are now stuck with a quandary – how to continue their ideals against such great odds. Their initial idea is to confront the five Manchu masters responsible for the temple attack, one of whom is a  Shaolin traitor (Wang Lung Wei), and try to quench their desire for revenge. However, they soon discover that they are not able to match the skills of their adversaries and barely escape with their lives.  The quintet are forced to re-think their strategy after their severe set-back; appreciating that they lack the ability to defeat the Manchu masters, they decide to spend their time training and honing their skills. With the Manchus using every means possible to track them down, the Ming patriots know that their time for revenge is nigh and plan one final attack.

‘Five Shaolin Masters’ is a Chang Cheh film that has attained classic status; the exceptional cast and well-worn storyline have long been appreciated by genre fans. Nonetheless, I couldn’t help feeling that the subject matter had been approached more successfully with films like ‘Men From The Monastery’ and ‘Shaolin Martial Arts’. What always made Chang Cheh such a significant figure in the world of cinema was the fact that his greatest works were underpinned by his themes and characters. With ‘Five Shaolin Masters’, there is a definite impression that the great director’s inspirational ideas of brotherhood and honour are somehow diluted. Though the quintet of lead characters are fully bound by the Shaolin code, the basic ideals that Chang Cheh’s finest works fleshed out are allowed to remain dormant. It is the underdeveloped nature of these themes that degrades the production’s merits.

As was said, characterisation is another important feature of a Chang Cheh film and, with ‘Five Shaolin Masters’, this area is also found wanting. Hu Te-Ti, as played by David Chiang, is an uninvolving leader while most of the other characters are under-written. The only exception to this is Ma Chao-Hsing who is given a mixture of playful arrogance and subtle immaturity; his arguments and misunderstandings with  Li Shih-Kai provide moments of mirth that create a balance with some of the more serious moments. Solid characterisation and good kung fu cinema have not always been a necessary combination, but one expects a bit more from a Chang Cheh film.

Despite my misgivings, there are still reasons why genre aficionados will enjoy the film. The choreography is varied enough to remain interesting despite the vast amount of action and the production values are a pleasant reminder of the difference between Shaw Brothers and the independent market. It’s also worth remembering what a stellar cast is assembled here – five of the Jade Screen’s great heroes face-off against five infamous villains – this might be worth the price of the DVD alone. Nevertheless, there are too many little hindrances that manage to combine and undermine the film’s better elements. It’s unfortunate to report that this film cannot live up to its reputation and fails to capitalise on its promise.