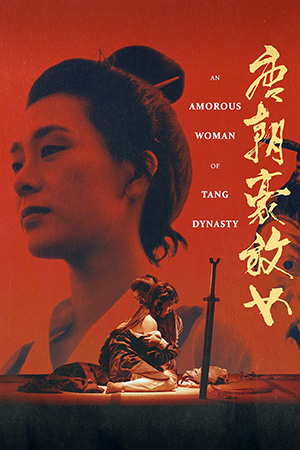 Neither content to be the wife of a government official or courtesan, though she had fallen into the servitude of both roles, Yu Yuan Gi (Pat Ha) enters a Taoist monastery to train as priestess by way of means to maintain her independence. Literate, articulate, and very much her own woman in an era where such a thing was almost unheard of, Yu’s brazen wanderings draw the consternation of the Head Priestess (Wang Lai). It also garners the attentions and desires of roaming mercenary Tsui Pok Hau (Alex Man), a fiercely nomadic warrior with whom she shares an affinity borne of ideals of individual freedom.

Eventually expelled from the monastery once her bisexual intimacy with maid Lu Chiao (Lam Hoi-Ling) is brought to light, Yu relocates herself and her entourage to Chang’an’s red light district where she entertains extravagant parties, expounds the virtues of free love, and self-promotes her poetry as the work of a literati in the public consciousness. Yet, though she amuses herself with the affections of nobleman Yung (Poon Chun-Wai), she finds her unfettered dreams and desires returning again and again to her errant soul-mate Tsui.

Based upon the nominal remnant details of the life of feminist Tang Dynasty poet Yu Xuanji (“Yu Yuan Gi” being a variant translation from the Chinese form), ‘An Amorous Woman of Tang Dynasty’ (1983) marked the directorial debut of eighties “New Wave” filmmaker/screenwriter Eddie Fong. Fong is perhaps better known in the modern era as the screenwriter spouse of acclaimed director Clara Law, but prior to the release of his debut feature he was already able to list writing charges for such ground-breaking New Wave titles as ‘The Beasts’ (1980), ‘Nomad’ (1982) and ‘Coolie Killer’ (1982) amongst his achievements. Produced by Shaw Brothers studios at the latter end of their reign as one of the region’s most influential and prolific production houses, Fong’s film garnered modest box office but purportedly suffered judicious editing pre-release (sources point towards his original cut running anywhere between two and a half and three hours) to a deliver a more commercially viable product. The film is somewhat hampered by dramatic shifts in narrative and tone, as well as a compressed non-linear time-frame, but these shifts only end up heightening the statelier arthouse aesthetic that Fong was obviously striving for. As a film, it is a far cry from the iconic martial arts fare that the Shaw studio name is usually associated with.

Leading actress Patricia Ha, of whom this reviewer has garnered a heartfelt respect and admiration of through retrospective analysis of her body of work, literally dominants the film as the powerfully independent and highly intellectual priestess-cum-literati Yu Yuan Gi. Ha was, perhaps, one of the greatest unsung actresses of her generation (from an international standing), and Fong utilised her to exceptional effect here. Whilst many western viewers would only ever know her as the cold-blooded assassin in Alfred Cheung’s gritty thriller ‘On the Run’ (1988), as Yu she expounds an amazingly controlled and complex performance; there is an icy detachment within the character, which Ha invests with multiple layers, hinting at a vulnerability and longing below her almost impenetrable exterior that draws one into her world. Additionally, Ha engages a lustre to her role almost as uninhibited as that of her character, daringly performing several scenes that require her in various stages of undress and sexual intimacy; even to this day, for a leading Hong Kong actress to commit so fully to such an adult-oriented role is almost unheard of if not totally shunned. It is to Fong’s credit that he adopts a respectful, even tender, treatment of Yu’s bisexuality which points towards how things might have turned out had not the early nineties (brazenly sexist) Category III exploitation explosion occurred.

Gorgeously lensed by Ardy Lam, who would eventually go on far “bigger” films such as ‘Once Upon a Time in China’ (1991) and ‘Police Story 3’ (1992), every shot is carefully composed and framed, capturing light and darkness where the visual design is called upon to compliment the unfolding story. Raymond Lee’s art direction beautifully augments and enhances Lam’s admittedly “high-art” camerawork, lending the production a feel more in tune with contemporary Japanese cinema than the encroaching realism of (then) modern Hong Kong filmmaking. These strengths aside, without forgetting a robust performance by rising star Alex Man as mercenary swordsman Tsui Pok Hau, one can’t help but ponder thanks to the jarring narrative leaps as to how deeply Fong’s original version delved into the life of Yu? An early appearance by nobleman Li Yi (played by Shaw veteran Ku Feng) seems the ranting of a passing favour obsessed, yet in history Li was Yu’s husband whom she was married to as concubine at the age of sixteen. Similarly, lobby cards of the day showed Yu locked in a torrid embrace with Tsoi’s enigmatic blood-brother, swordsman Auyang (Chang Kuo-Chu), however the film itself is shorn of any sense that the pair harbour stronger feelings for each other than a grudgingly separatist respect

However, what remains of Fong’s original cut (rumoured lost to the ages) is still a measured, stately and art-infused historical drama well worth a look for those with more artistic or intellectual aspirations from their period Chinese cinema. Personally, my only major niggling bugbear with ‘Amorous Woman’ is its dramatic shift of empathy away from Ha’s character come the final act; where Yu has treated been with respect and the indulgence of a thoroughly modern woman, free-spirited and head-strong, centuries ahead of her time, petty jealousies and previously unstated violence appear to give way to historical accuracy (of sorts). It’s a jarring, though well documented in the history books, change of tone that unfortunately almost tears apart the liberal feminism of the story overall; what can one do though? Facts are facts and Fong should probably be commended for remaining true to them over romanticising his heroine into some kind of legendary figure (suffice to say, her poetry remains an integral aspect of Chinese history). Somewhat frustrating due to its fractured narrative, yet compelling within its aesthetic and themes, Eddie Fong’s directorial debut remains a unique experiment of its era as well as an enigmatic anomaly of an industry not usually renowned for taking such non-commercial, though subversively intellectual, risks.