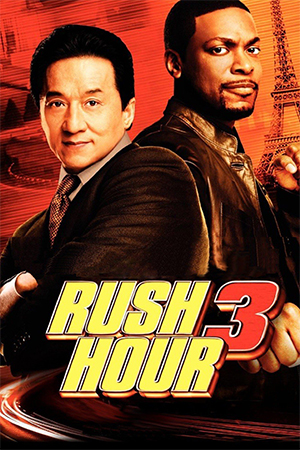 Much like Jackie Chan himself, I’ve never been a particularly big fan of the ‘Rush Hour’ films. While they can occasionally pass themselves off as harmless entertainment, it’s the overly familiar formula, woeful racial stereotyping, and tedious rantings of Chris Tucker that have always put a dampener on them for me.  With that in mind, I begrudgingly decided to give this third outing a shot even though it clearly promised more of the same.

When a sniper attempts to kill Ambassador Han, Lee (Chan) promises his daughter that he will track down the people responsible.  Luckily, the assassins return in an attempt to finish the job and with the help of Detective James Carter (Tucker), Lee manages to capture and interrogate a suspect. Strangely enough, the man turns out to be French which leads our heroes to relocate their search to the streets of Paris.  With Carter always keen to take in the night life, it’s convenient that the trail leads them to a nightclub and it isn’t long before they are causing trouble with local gangs as well as the police.  However, there is a secret that Lee is withholding and as the case is coming to a close he is going to have make some difficult decisions.

Even if you’re a fan of the ‘Rush Hour’ series, I very much doubt that this third offering will do much to satisfy.  It’s instantly obvious that everyone involved is just going through the motions and there’s nothing even remotely new or exciting here. The little plot we are spoon fed is really just an excuse to relocate the action to new surroundings, and most of the comedy routines feel like flat repetitions.  There’s also a noticeable lack of chemistry between the two leads and even the actors themselves look to be struggling. Chan just does the bear minimum to get him through, while Tucker just recycles the same material that he’s been doing since part one.

The action in ‘Rush Hour 3’ is so uninspiring that it practically slips by unnoticed. Although it’s fair to say that the previous outings have never exactly whipped up a storm, Chan has occasionally managed to pull out a few of the stops to create some creative sequences. Sadly though, the set pieces here are just so bland and forgettable that they barely even warrant talking about.

On the strength of this effort, I think that even hardcore fans would have to agree that the ‘Rush Hour’ franchise has run its course.  ‘Rush Hour 3’ barely even passes as a competent movie and I think that it’s about time that Tucker (who never really had much talent in the first place) and Chan moved onto other things.