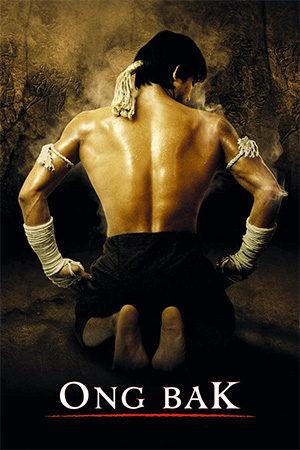 ‘Ong Bak’ surfs into town on a wave of hype and anticipation generated by leading man Tony Jaa, who was seemingly born suspended on invisible wires mid-round house kick.

Jaa possesses the martial arts skill of his hero Bruce Lee and the chisel-jawed charisma of Brandon.  With no wires or digital leg-ups Jaa soars through the air, somersaulting long after gravity should have claimed him, before crunching down on his opponents with perfectly executed Muay Thai moves.  Comparisons with Jet Li and Jackie Chan seem inevitable, but this guy is a living, breathing video game character, so small wonder he got started stunt doubling in ‘Mortal Kombat: Annihilation’.

But ‘Ong Bak’ has more to offer than a real-life superhero.  Although the postage stamp plot recalls a million kung fu flicks past, the genius is in the telling.  Ting (Jaa), a young country boy, journeys to the city to retrieve the head of Ong Bak, the Buddhist statue stolen from his village, and must confront a psychotic crime boss (wheelchair bound and voice-box reliant to boot) who terrorizes the downtrodden.  Director and co-writer Pinkaew invests his characters with a vibrant humanity and slyly injects a vein of national pride; Ting, forced to enter an underground fighting competition, works his way through American, Australian, Japanese and Burmese opponents.  The morality on display is clear-cut: the warmly-hued village is a good place, the sickly-green, neon soaked Bangkok isn’t and profiting from religion is bad, but subtlety is not ‘Ong Bak’s agenda, just as Bruce Lee, Jet Li and Jackie Chan films rarely muddy the moral waters.

Pinkaew, assisted by choreographers Jaa and Panna Rittikrai, shoots a fight scene with the precision of a grandmaster, moving his camera to capture the power and kineticism of the martial arts sparring, varying speeds to accentuate the physical prowess of a man who is as comfortable fighting mid-flight as he is on terra firma.

As in Bruce Lee’s movies the first act teases the audience with brief glimpses of Jaa’s ability, before unleashing him in a sustained set piece.  Here it is a chase scene (Ting attempts to avoid violence whenever possible) involving Ting, lovable rogue Humlae (Wongkamlao) and the spunky girl Muay (Yodkamol) that places increasingly outlandish obstacles in Ting’s path.  Watch in awe as he cartwheel between two panes of glass, launch himself through a barbwire hoop, bound over two cars in succession and stepping-stone an escape on his adversaries’ heads.

Besides the acrobatics ‘Ong Bak’ delivers the martial arts goods in spades.  Jaa spent four years perfecting the Muay Thai discipline and demonstrates how elbows and knees are deadlier than any number of nunchucks.  Through the numerous bouts Ting is forced into, including a showdown in an mountain temple, eye-popping displays of martial arts mixed with WWE style chair and table smashing exhilarate the senses, even as the shattered bones and head trauma occasionally freeze the smile on the face.

Contender Entertainment and Premier Asia have re-scored this release, but any Miramax comparisons end there; the new soundtrack mixes traditional Thai music with a throbbing techno soundtrack, providing a neat emotional complement to the visuals.  A sub-plot involving Muay’s drug addicted sister has also been pared down, but again not to any noticeable detriment, and the money spent creating a bass-heavy 5.1 sound mix and tidying up the print demonstrate a genuine respect for the film and the genre.

‘Ong Bak’ is a flashy calling card to be sure, boasting onscreen invitations to Luc Besson and Spielberg via cheekily placed graffiti, but the invention, daring and sheer elation on display announce white-hot new talents in action cinema. A visceral joyride that leaves you bruised, Bak-slapped and buzzing.