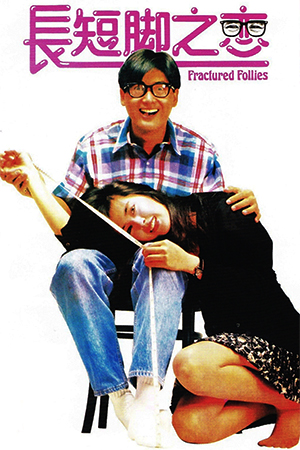 Joe (Chow Yun-Fat) is someone who turns his hand to various kinds of work and, alongside his loyal friend Sea (Wong Ching) flits from one to another. While driving a lorry on day, Joe knocks down a young woman on the street and, on seeing her unable to walk properly afterwards, begs her to offer him the opportunity to make up for the accident. What Joe doesn’t know is that the woman, May (Joey Wong), was born with an ailment that means she has one leg slightly longer than the other and walks with a limp that has nothing to do with the accident. May, however, takes advantage of the situation and tells Joe that he has to work at the supermarket she owns until she is satisfied that he has paid his ‘debt’ off. Overcome with guilt, Joe happily agrees and, along with Sea, works hard day and night at the supermarket under May’s direction. However, the feelings of guilt begin to turn to ones of affection for May and Joe finds himself slowly falling in love with her. The feeling is mutual, but May is also aware that she must tell him the truth about her lie and risk losing him forever.

It’s fair to say that if you don’t consider yourself a fan of Chow Yun-Fat’s early comic films, this will hardly convert you to them; it is not the best of this selection or the most consistent. Nonetheless, ‘Fractured Follies’ offers a reasonable ninety minutes of entertainment which, while never remarkable, isn’t without some charm. Chow, with a far more restrained performance than in the overlong ‘The Greatest Lover’, is his usual professional self as the leading man. What he does so well is to exude charm, but remain a figure for the audience to empathise with. Once again Chow is given a leading lady who brings out the best in him; the ever watchable Joey Wong fits this position well and is a reminder of those glorious days of 80s Hong Kong cinema. Interestingly though, Chow’s sidekick here is Shaw Brothers bit-player Wong Ching – an unusual choice that succeeds because of this very reason.

While the cast (minus the over-the-top Nina Li Chi) are restrained, it is director Wong Chung who allows matters to get out of hand. Although he helps the storyline remain interesting throughout, there are still elements of the direction that have been seen too many times for comfort. Naturally an audience cannot expect a truly original rom-com, but at least a less-pedestrian execution would have helped matters. ‘Fractured Follies’ is not big on belly laughs and may not, as was mentioned, be to everyone’s’ tastes. There is, though, a certain something which helps the overall production remain watchable.