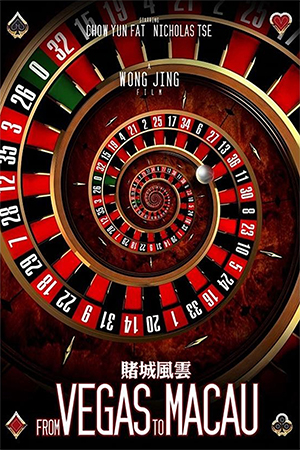 Along with his cousin Karl (To) and father Benz, con-artist Cool (Tse) specialises in fleecing the less pleasant members of Hong Kong society including nasty loan sharks and small-potato crooks. All of their profits are ploughed back into providing healthcare for Cool’s sickly mother who is also being tended to by his mysterious long-lost brother Lionel. The latter is revealed to be an undercover agent intent on bringing down the nefarious plans of Ko who is slowly taking over the Macau underworld; when Lionel’s identity is uncovered he is ruthlessly despatched by Ko’s henchmen. When the family discover the fate of Lionel they decide to combine their wiles and take on Ko, utilising the brilliance of suave gambler and old friend Ken as they do so.

When Wong Jing and Chow Yun-Fat are re-teamed in a story centred around skilful card games and trickery, it’s impossible not to think about ‘God of Gamblers’, their 1989 monster hit that spawned a plethora of imitators. Jing knows exactly what his audience is anticipating and toys with them mercilessly, dropping little hints to that famous collaboration along with nods to other Chow Yun-Fat films from the golden era. Yet, despite a post-credits cameo, ‘From Vegas To Macau’ is not an official ‘God of Gamblers’ sequel and there is no continuation of the story of heroic Do San. This is a minor disappointment as the original deserves a much better sequel than the lazy ‘God of Gamblers’ Returns’ that blighted the mid-90s.

Despite its absence from the famous canon, ‘From Vegas To Macau’ is still a good though never fully engaging action-comedy. It is flattened by the usual Wong Jing silliness that seemed to dominate the director’s style ever since the first ‘God of Gamblers’ film. Whereas the original showed a restraint on Jing’s part and could be taken seriously when it needed to be, subsequent spin-offs became increasingly tiresome. This stays just the right side of infuriating, using Nicholas Tse and the greatly appreciated Chow Yun-Fat as a bulwark against the onslaught of Jingisms and a typically moronic performance from Chapman To.

‘From Vegas To Macau’ is a half-hearted throwback to a better time in Hong Kong cinema and this sense of nostalgia may have helped its considerable financial gains at the box-office. It’s best viewed as an occasionally enjoyable diversion that, on sporadic occasions, hints at how good a reboot of one of the 80s most iconic film series could be.