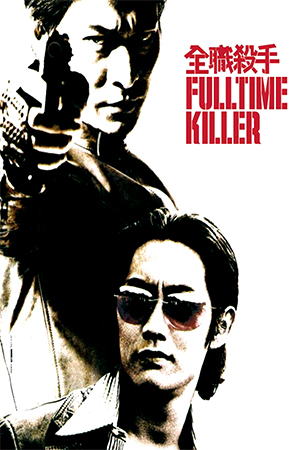 It’s been some time since we last saw any new “heroic bloodshed” films from Hong Kong.  As is often the case though, these styles eventually come back into fashion and ‘Fulltime Killer’ is the first to re-emerge from the ashes. Hailing from the masterful Johnnie To, will it measure up to some of the classics or just be a case of one bullet too many?

O (Sorimachi) and Tok (Lau) are two paid killers on opposite sides of the scale.  O is rated number one in his field and known being the model professional.  Tok, on the other hand, is just starting out in the business and is looking to make a name for himself by using movies as his inspiration.  When Chin (Lin) appears on the scene, she is torn between the two men but discovers that one is too shy to talk to her and the other pays her too much attention.  It looks like her decision will have to be a quick one though, as Tok realises that the easiest way to get to the top is to kill the man above him.  The question is, who will be the last man standing and which one of them will Chin be rooting for?

Considering slow motion replays and the whole bullet ballet thing has now been done you death, you have to wonder what an action flick like ‘Fulltime Killer’ can possibly bring to the genre. Well, the simple answer would have to be not much at all.  However, this is not necessarily a negative as provided you get the basics right then a little familiarity is easily overlooked. And in the case of ‘Fulltime Killer’, this is exactly what Johnnie To does. A fairly run of the mill storyline is knocked up a notch or two by the slick execution and the stylish shoot-outs are so well handled that you find yourself thoroughly entertained. It’s a fine accomplishment and if you’re a fan of action flicks then there’s plenty to appreciate here.

In terms of the acting, ‘Fulltime Killer’ contains some nicely understated performances. Andy Lau in particular, is on fine form and ditches his clean cut image to play a slightly more unhinged anti-hero. Meanwhile, Sorimachi portrays the strong-yet-silent type and even though he is given very little dialogue, still does a good job of injecting some personality into his character.  As for the action, it’s fairly stylish and certainly borrows a trick or two from some of the classics of the genre. However, we all know To is a fan of film noir and this is echoed through ‘Fulltime Killer’, with the combatants playing it cool rather than diving all over the place.

Aside from some fairly patchy English dialogue, the biggest problem with ‘Fulltime Killer’ remains the ending. Without wanting to give any spoilers (look away now if you’re worried), the film fails to give us a climactic battle and instead chooses to end on a rather weak twist. Unfortunately, it leaves the viewer feeling somewhat unfulfilled and you get the distinct feeling that the writers may have just run out of ideas.

On the whole though, ‘Fulltime Killer’ is still a relatively pleasing return to the genre. It certainly doesn’t break new ground or quite manage to sit amongst the classics, but it’s a solid and stylish gunplay flick that delivers on a number of levels.