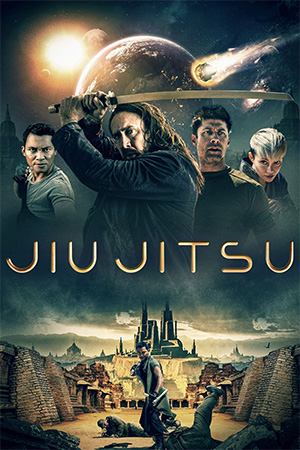 A high concept, an action-packed trailer, an eclectic cast, that title and Nic Cage: ‘Jiu Jitsu’ was gearing up to the be B-movie action extravaganza 2020 needed! And it almost was, almost! Entertaining for the most part and certainly packed with fight action, the film unfortunately suffers from muddled execution of its own brilliantly bananas concept.

Every 6 years a passing comet allows a super-duper, space alien fighter (named Brax) to come to earth to fight the best jiu jitsu warriors the planet has to offer. If earth doesn’t pony up the fighters then apparently, he, err, kills everyone! Wreaking havoc throughout Burma, Brax crosses paths with jiu jitsu fighter Jake (Moussi) who survives his initial encounter with the alien but loses his memory in the process. Finding himself in the custody of a local military unit, Jake tries to piece together what is happening/who he is; is rescued by bad-ass fighter Tony Jaa; falls under the tutelage of a slightly barmy Nic Cage (is there any other kind these days?!); hooks up with Frank Grillo and his band of jiu jitsu warriors; and then gets into multiple tussles with Brax, all leading to lots and lots of fighting.

Straight up high concept, B-movie madness, ‘Jiu Jitsu’ feels like it’s been transported straight from the 90s but minus the charm of that decades many (many) high concept, martial arts, VHS actioners. While not lacking in the action department and featuring a cool alien bad guy who likes to fight, ‘Jiu Jitsu’ unfortunately just feels too messy to really engage with and despite Cage (and supporting cast member Eddie Steeples) best efforts, forgets to have fun with its bonkers concept. It’s all takes itself a little too seriously, seems to be a mish mash of ‘Predator’, ‘The Guyver’, ‘Mortal Kombat’ and, err, ‘The Bourne Identity’, and the McGuffin of Jake having no memory seems to solely be there so the rest of the cast can fill him (and us the viewer) in on the whole backstory of the alien. Despite a great cast of familiar faces, Frank Grillo, Rick Yune, Marie Avgeropoulos and Juju Chan get little to do and while Cage is fun, it’s schtick we’ve seen him do millions of times now.

Tony Jaa and Marrese Crump thankfully shine in their roles, getting many of the better action and character beats and while Moussi certainly has the hero look and can fight, he’s unfortunately a little leaden as the would-be hero. Thankfully the makers pack proceedings with almost non-stop fight action and the bad guy alien (at least to this reviewer) is cool. While some have complained it’s just a guy in a suit it works well for the action meaning the heroes can engage and fight with the bad guy rather than do battle with a load of CGI nonsense. I’ll take a guy in a rubber suit with fight moves over a mo-capped monstrosity any day! The action varies but there’s a nice mixture of fight styles, weapon work and Tony Jaa all but steals the show with his epic one-take fight scene.

A mixed bag for sure, ‘Jiu Jitsu’ has enough decent action to carry it through, a cool bad guy and is certainly better than Moussi and Dimitri Logothetis’ previous collaborations on the ‘Kickboxer’ remakes/reboots. However, the somewhat muddled execution and little sense of fun damper what could have been a high concept blast.