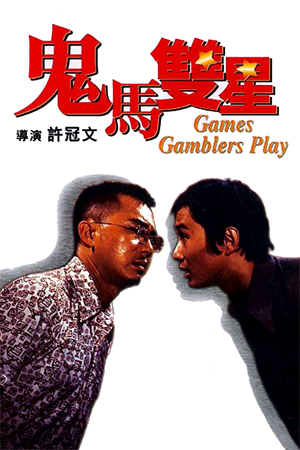 1974 saw one of Hong Kong’s landmark films released to immense business. ‘Games Gamblers Play’ not only smashed box-office records, it also made comedy actor Michael Hui a major star and helped Cantonese to become the predominant cinematic language. After this, audiences would have a new local hero following the tragic death of Bruce Lee and for the next six or seven years Michael Hui would remain the box-office king.

The basic components of the storyline are borrowed from ‘The Sting’ i.e. conmen tricking a gangster. Here, however, the film opens with leading gambler Teng (Michael Hui) serving out the remaining days of a prison sentence. While there he befriends naive youngster Liu (Samuel Hui) who is quickly fascinated by his new mentor. On leaving prison, the pair combine forces and turning their minds to all manner of money making plans. Having tried quiz shows and just about every form of gambling, Teng and Liu devise an elaborate con with an off-track betting shop being the target. With meticulous execution the scheme succeeds, but their victim learns of his deception. Using all of his criminal hordes, the deceived boss goes looking for revenge.

It’s remarkable looking back at this 1974 film and noting how self-assured Michael Hui’s screen persona already was. He plays a character-type who would be constantly associated with his name: a bad-tempered, money grabbing misery who eventually gives some indication of having a slightly more appealing side. ‘Games Gamblers Play’ shows Hui easing into this part with real confidence and lapping up every minute of his screen time. He also transfers the natural chemistry he enjoyed with Samuel in their popular television show to the screen flawlessly.

In some ways, however, this is a slightly dated Michael Hui comedy that doesn’t have the lasting appeal of the classic ‘The Private Eyes’. Some of the humour doesn’t have the stamp of quality of Hui’s later efforts nor does it translate with as much ease to an English-speaking audience. Whereas certain scenes call for that unique spark of Michael Hui magic they end up taking the safe and predictable route that ends up disappointing. For a first major comedic film though, this can be forgiven on Michael Hui’s part and there is still enough amusement to be had from this. His skills at drawing out humour from even the most mundane situations is very much in evidence here and there are definitely more hits than misses. ‘Games Gamblers Play’ is much more than just a milestone that should be viewed for curiosity value. As an introduction to the Hui brothers or Hong Kong comedy in general, this is a fine starting point.