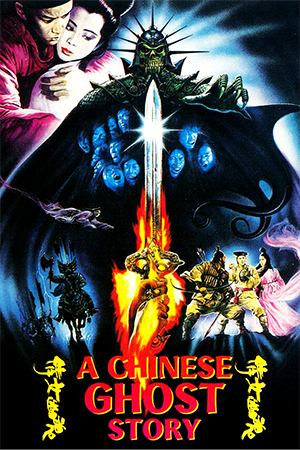 Tsui Hark remembered a film from his childhood that used to scare him. The name of this film was ‘The Enchanting Shadow’ made in 1960, which was adapted from a story by Pu Sung Ling (who also wrote the original story to King Hu’s ‘A Touch of Zen’). In 1987 he would film a remake entitled ‘A Chinese Ghost Story’ handing the directorial reigns to Ching Siu-Tung who had previously directed the landmark ‘Duel to Death’. It is widely recognised however that as Tsui was always on set he had in fact directed a number of sequences himself making this more of a collaboration between the two maestro’s. It has also been speculated that this is the film where Tsui famously locked his cast and crew in a studio for three days and three nights until a sequence was finished.

Ling Choi San (Leslie Cheung) is a tax collector, who when he reaches an inn to collect he finds than all the ink has run in his account book due to the rain he has had to travel in. As he has no legible accounts the inn keeper refuses to pay. As he has no money he spends the night in the famously haunted Lan Ro Temple. It is here he first encounters the eccentric nomadic swordsman Yin Chek Hsia (Wu Ma), who can’t live in the world of mortals so he chooses to live in the world of ghosts. It is here that Ling become inexplicably drawn to the bewitching singing of Lip Siu Sin (Joey Wong). Ling becomes enchanted by her oblivious to the reality that she is in fact a ghost who lures young men so that Old Dame (Lau Siu Ming), thousand year old tree demon, can suck out their Yang energy, thus leaving a corpse shrivelled like a sultana. Lip however becomes equally besotted with Ling and attempts to hide him from the Old Dame. But Ling and Lip’s love for one another is doomed as Lip is betrothed to the Lord of the Black Mountain, and following a battle with Old Dame, Swordsman Yin takes pity on Lip and agrees to help Ling take her ashes back to be buried in her home village so she can re-incarnate. Despite their attempts she is sucked into the netherworld and they must follow to save her.

The battle in the netherworld (The sequence believed to be the one where Tsui locked his cast and crew in a studio until it was finished) wasn’t originally in the script but Tsui thought the film needed a big action finale. However by the time filming started for this sequence, the budget had already been exhausted. In order to disguise the lack of funds Tsui filled a sound stage full of smoke to hide the non-existent sets. The result was highly effective and illustrates how Hong Kong film makers can make up for a lack of funds through sheer imagination. Sadly this now seems to be a dying trait in an industry that appears to be losing this creativity under the ever increasing budgets.

‘A Chinese Ghost Story’ is a landmark in Hong Kong film history. It is as much a love story as it is an action/horror film and would define the visual formula for sequential wuxia films. It even has a few pauses for a hint of comedy but nothing intrusive. Fresh and original (despite being a remake), this film has not dated and still remains just as fresh today. There are great performances all round and the casting of Wu Ma as Swordsman Yin is inspired. It also has a suitably haunting soundtrack.

Any fan of wuxia films MUST see ‘A Chinese Ghost Story’. I can not give a higher recommendation for this veritable classic. It deserves every bit of praise it has received over the years.