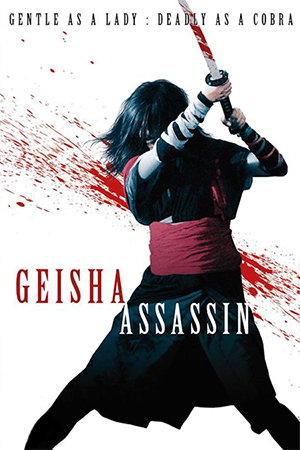 At first glance, Kotono (Minami Tsukui) appears to be just another beautiful geisha who parades through the streets of Japan with both grace and panache. However, under the surface lurks the heart of a warrior, as she was trained in a secret sword technique passed down from her father. Unfortunately, she also witnessed her father being slain by a fellow student known as Hyoe, and she pursues him in an effort to take her revenge. Throughout her journey, Kotono will have to battle Japan’s most notorious ninjas and assassins before learning of a hidden secret that may shock her into abandoning her quest.

Over the years, I’ve encountered a number of action films that possess a sorry excuse for a story but ‘Geisha Assassin’ has to be the new frontrunner. The entire premise is literally set up in the opening dialogue exchange, all two or three lines of it, and then the remainder of the film is spent following the heroine as she encounters one opponent after another. Now, while I may be a self-confessed action freak who loves nothing more than a good fight or two, it would have been nice if the film had invested just a little time in developing the story or characters. It’s a shame really because despite the obvious low budget, the film certainly seems to portray an accurate representation of the era, with costumes and backdrops that are definitely very easy on the eye.

Thankfully, for a film that is so reliant on its fight sequences, ‘Geisha Assassin’ does have a number of action-orientated positives to offer. Focusing mainly on weapon work, the swordplay on display is very impressively choreographed, with a number of intricate combinations and entertaining acrobatics. Leading lady Minami Tsukui gives an excellent account of herself, appearing to be responsible for all of her own action scenes and looking extremely adept in both sword fighting and the martial arts. She is also treated to a number of really enjoyable larger-than-life opponents, ranging from monks to ninjas to the walking undead. Of course it isn’t all perfect as the slow motion haze that encompasses the entire film is somewhat distracting and there are also a couple of moments where the action is clearly sped up. Overall though, it’s pretty solid for a low budget outing.

If you fancy watching a series of fun fights that feature some bizarre opponents then ‘Geisha Assassin’ is certainly as good a choice as any. However, that is literally the only thing the film has to offer and this is one sword-fighting flick that sticks to doing exactly what it says on the tin.