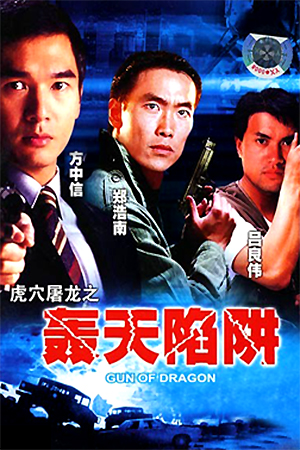 This low budget mish-mash of cheesy American B-movie and ultra-violent Hong Kong action sees director and action specialist (Tony) Leung Siu-Hung take his tale of cops and criminals to the mean streets of New York. Tough and dedicated Hong Kong supercop Lam Kwok-Ching (Ray Lui) flies into New York to be reunited with his wife and son. Somewhat estranged from one another due to Ching’s dedication to his job, the family hope to reconnect. However, also in town are a vile group of thugs headed by Prince (Cheng) who want Ching dead after he attempted to take them down back in Hong Kong. With his life threatened and his family now at risk, Ching has no option but to join forces with the (rather racist!) FBI if he is to keep everyone alive and bring down the gang once and for all.

This is nothing fans of the genre haven’t seen before and typical of the type of full throttle action pictures that were being put out at the time: low budget, cops, triads, guns, martial arts, bit of comedy and a ton of dangerous looking action and stunt scenes. The novelty of ‘Guns of Dragon’ is it having been shot in the US using American actors to bulk out the cast. So we get a head on collision of styles and languages (and a very loud, obnoxious and racist FBI agent our hero has to team up with: PC not being high on his agenda!) that while it sticks to its all-out-guns-blazing-tough-guy-swagger ends up being just another low rent and junky pot boiler.

Leung Siu-Hung (no stranger to working in the US having helmed Gary Daniels fight-fest ‘Bloodmoon’ and handled action on everything from ‘King of the Kickboxers’ to ‘Shadow: Dead Riot’) makes sure proceedings rocket along, everyone over acts and even shoe horns in John Shum (‘Winners & Sinners’) for a bit of, yep you’ve guessed it, comedy relief. Thankfully there is a ton of bonkers action on hand to keep one interested though it does take a good half an hour to kick off. Released when the heroic bloodshed genre was at its peak, ‘Guns of Dragon’ features several elaborate and sustained scenes of gunplay that what they lack in John Woo panache and poetic-ness make up for in rounds discharged, carnage caused and bloody squibs burst: particular memorable is the raid on Ching’s family home, which gets completely destroyed in the ensuing bullet riddled madness.

Certainly a product of its time and now rather dated, ‘Guns of Dragon’ is still worth a watch for those in the mood for unpretentious and gratuitous gun blazing nonsense.