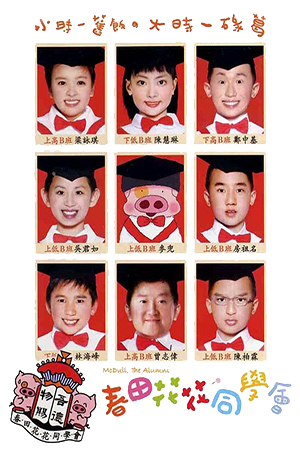 The young porcine philosopher returns in this mixture of live action sketches and the well loved animation of Alica Mak. While such a hybrid of styles is fraught with danger, this latest entry into the series proved to be the most successful at the local box-office, no doubt helped by the parade of Hong Kong stars who lend their weight to the production.

The young students of Springfield kindergarten are invited by their teacher to muse on how they will become ‘Pillars of Society’ when they leave school. McDull, though, is far too distracted by his rumbling stomach to give the question the serious consideration it deserves and drifts away into a series of extravagant day-dreams. Meanwhile the headmaster is keen to unite former pupils of the school in celebration of the upcoming 50th anniversary of its opening, an idea that opens up into an exploration of what former ‘graduates’ of the kindergarten are currently up to.

The first two McDull films gave Hong Kong a small, yet significant voice in the world of animation. Combining an exquisite visual style with an introspective tone rarely attempted in the field, they managed to offer a different perspective on common themes. The obvious worry about ‘McDull, The Alumni’ is how much of this treasured élan would remain and indeed whether it is merely an excuse for Samson Chiu and producer Peter Chan to fill the film with cameos by celebrity friends. Encouragingly though, this proves to be an unfounded fear as Chiu strikes a superb balance between the animated skits of our eponymous hero and the comedic sketches of the glittering cast.

‘McDull, The Alumni’ starts as it means to go on; initially there is the opinions of the beloved pig, then an amusing scene where robbers and their hostages are arguing about the quality of the food ordered from a nearby restaurant. This may not sound like a formula for success, but Samson Chiu knows how to weave together off-kilter sketches into an engrossing whole – something he proved in the critically acclaimed ‘Golden Chicken’ films. It may not have a linear narrative – choosing an anecdotal approach rather than one centred around a traditional story – but the parts are consistently entertaining enough to make a fascinating whole.

The film concentrates on humour and in this area it succeeds admirably. With a zealous mixture of surrealism and satire, ‘McDull, The Alumni’ alludes to Monty Python while also remaining very true to its Eastern roots; there are in-jokes a-plenty, but there is also an international flavour of absurdism. From a scene where university graduates race to become BBQ chefs to a delirious scene where Christopher Doyle dances with schoolchildren in an ode to vegetarianism, this is a comedy that uses a deceptively sophisticated humour for all ages – and not in the usual nudge-nudge, self-smug way that the recent slew of animated films from Hollywood have done. The satirical edge is subtle enough not to alienate a younger audience, but still probing enough to dig into its targets; the scene where amnesiac Ronald Cheng describes how he gets through the day is incisive and ultimately quite poignant. Such a focus on comedy comes at the expense of McDull’s existential musings, though the spirit of the previous chapters in his screen life infuses the live action moments.

At their heart, the McDull films were primarily about someone trying to find their place in life, to understand the people around him and, as the narrator, to appreciate where things went wrong. ‘McDull, The Alumni’ doesn’t quite match the resonance of the past two outings, though there’s a great deal to appreciate in this surprising comedy. Not all of the sketches hit their mark, but the majority manage to leave a smile while there are also a few laugh-out-loud moments to savour. Samson Chiu can be congratulated for taking a bold step in a new direction while still retaining much of the gentle punch that is associated with the brand. Another foray into the animation/live action mix would be most welcome on the evidence of this recommended hit.