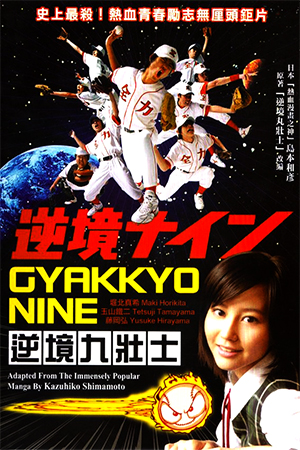 Adapted from popular Manga work ‘The All-Out Nine – Field of Nightmares’, ‘Gyakkyo Nine’ is the familiar set up of a team of no-hopers taking on incredible odds to prove themselves. In this instance the sport of choice is baseball and the adversity comes in the shape of the fearsome national champions who are challenged by the clueless heroes. Should the Gyakkyo Nine lose again, their baseball field will be converted to a football pitch on the orders of a headmaster tired of seeing losers represent the school. Team captain Toshi decides to galvanise his charges and prepares them to battle their way through the national championships, proving the numerous doubters wrong.

‘Gyakkyo Nine’ betrays its roots from the first scene to the very last. The opening five minutes are so over-the-top, so forceful in its style of humour and so reliant on wacky visuals that it shouldn’t take viewers too long to ascertain whether this is the right film for them. And it didn’t take much more than the aforementioned three hundred seconds for this reviewer to realise that this probably worked much better in Manga form.

There are endless underdog films – Asian cinema has a particular skill with this theme – and so any attempt to tell the same kind of story in a different way needs to hold the attention with its characters. ‘Gyakkyo Nine’ never allows its stars to escape their cartoonish roots, leaving any attempt to have the audience cheering on their side floundering. The totalitarian headmaster, the wiley old misunderstood pro and the gawky hero secretly in love are all familiar cyphers that find themselves inhabiting Eiichiro Hasumi’s repetitive world. The grandiose humour can only excuse a certain amount of time before the story becomes tiresome and the comedy grating.

A few bone dry moments of humour are blended into the forced wackiness and these are the redeeming points for an overstuffed cacophony of empty spectacle. The climax finally ties up the various loose ends, but so little genuine excitement has been generated that it becomes more of a relief than a pleasure.